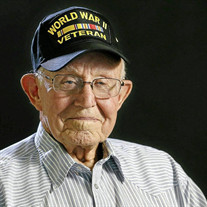 Oscar “Junior” Nipps was born in Broken Arrow, Oklahoma on Friday, September 25, 1925 to Oscar Thomas and Bessie (Baker) Nipps. He passed from this life to his eternal home in heaven on Monday, April 19, 2021 at the age of 95. “Junior” was the third of five children born to the Nipps’. His father was a farmer, and his mother was a full-time homemaker raising those five children. “Junior” attended Sunnyside School on 71st Street in Broken Arrow through the 6th Grade. By this time, his father needed his full-time help with the family farm. Just one month before his 19th birthday, “Junior” was drafted into the U.S. Army. He served overseas in the South Pacific Theatre as an Infantryman, earning both a World War 2 Victory Medal as well as the Bronze Star. One day when he was doing KP duty, the head cook noticed how good of a job that he was doing. He approached “Junior” and told him that if he would volunteer for full-time KP Duty that the then head cook was soon going to get out and they would need someone like “Junior” to take his place. His final six months in the Army was serving the men in the “mess hall” as their head cook. “Junior” had been friends with Melza Faye Hodges since their early childhood. Three months after he returned home from his service to our country, he and Melza were married on March 30, 1946 in Broken Arrow. Their marriage would last over 57 years before her passing in 2003. They became the parents of three children: two sons and one daughter. He started his career in the construction business as a drywall installer and then eventually became an electrician and worked for K & R Electric for over 20 years before retiring. He always worked hard to provide for his family and is remembered as a very kind and fair man. He has a street in Broken Arrow named after him and received an honorary diploma from Broken Arrow High School on July 1, 2020 in front of hundreds of cheering students and parents at the ceremony. He has been a member of the Broken Arrow Church of Christ for the past fifteen years and worked at Broken Arrow’s Military History Museum for the last several years as a volunteer. “Junior” was a true American hero and will be missed by all who knew and loved him. In lieu of flowers, the family has requested donations be made to: Military History Museum 112 N. Main Street Broken Arrow, OK 74012 or www.okmhc.org “Junior” is survived by: Son, Roland Nipps and his wife, Jeanie of Broken Arrow Grandchildren: Valina Enslen of Wagoner Rick Nipps and his wife, Dawn Shelly Shannan Noland Great Grandchildren: Drew, John, Patrick, Audrey, Zoe and Austyn Son-in-law: Tom Evans He was preceded in death by his wife, Melza, a daughter, June Evans and a son, Ronnie Nipps

Send flowers to the Nipps family.