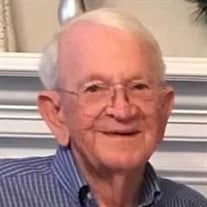 Norris Welker was born on Friday, September 17, 1937 in Seneca, Missouri. He was the son of Clarence “Jack” and Edith (Norris) Welker. He passed from this life on Thursday, June 18, 2020 in Tulsa, OK at home. He was 82 years old. Norris was the youngest of five children born to Jack and Edith. He attended school in Seneca, graduating from Seneca High School in 1954. Norris excelled in baseball as a youth and earned a scholarship to play for the University of Tulsa. After attending, he played minor league baseball for the Oklahoma Gassers. During late high school, he was introduced to Norma Welker by her brothers. They married on May 29, 1958 and were blessed to spend 62 years together as husband and wife. Following marriage, Norris worked in the oil and gas industry for ONG, while there, he went back to school and finished his business degree from Central State University in Edmond and earned his CPA credentials. Upon completion, he worked for a short time for the IRS before going back into the natural gas industry working in accounting. They raised three daughters and a son whom they are very proud of. At age 40, with two of their four children also in college, Norris went back to the University of Tulsa where he earned his law degree. After graduating and passing the bar, he established his law practice in McAlester, OK where he practiced Estate and Tax law for over 20 years, with Norma working in the office alongside him. Throughout much of his life, he enjoyed hunting, fishing and OU football. He was very active during his law years in Rotary and was especially proud of their work with polio vaccines. He enjoyed golf as well, and was a scratch golfer. Both he and Norma also had a passion for travel and had many wonderful adventures. Norris is survived by: his wife, Norma, of their home in Tulsa, OK. Daughters: Sherri McElroy and husband, Bowden of Broken Arrow, OK; Gina Howell and husband, Richard of Houston, TX; and daughter Lori Gudgel of Tulsa, OK. Son: Gregory Welker and wife, Valerie, of Broken Arrow, OK. 10 Grandchildren: Kathleen Hilton, Kristeen Kidd, Dylan Howell, Brett Gudgel, Caroline Daggett, Kimberly McElroy, Brooke Gudgel, Brandon Howell, Carly Gudgel and Vivian Welker. 8 Great Grandchildren: Paisley, Jentry, Connell, Clara, Wyatt, Avery, Macy and Declan. He was proceeded in death by both parents, two sisters: Zelpha and Margie and two brothers: Calvin and Warren.

The family of Norris John Welker created this Life Tributes page to make it easy to share your memories.

Send flowers to the Welker family.