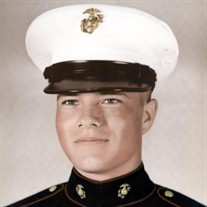 Norman Edward Proctor was born in Eufaula, Oklahoma on Friday, July 17, 1936 to Byron Earl and Bonnie Grey (Shafer) Proctor. He passed from this life on Saturday, May 15, 2021 in Tulsa, Oklahoma at the age of 84. Norman was the third child of four born to the Proctors. They lived in the Eufaula area until Norman was fourteen, when the family moved to Tulsa. His father worked in the oil industry building storage tanks. His mother stayed at home and took care of the children. One of his jobs as a teenager was breaking horses. Norman graduated from high school in 1954 and joined the U.S. Marine Corp, where he served a total of eight years. After his time in the service, Norman married and had one son, Keith. Even though the marriage was not long term, he and Keith remained close his entire life. Norman spent many years working as a brick mason, first as an independent contractor and eventually started his own business, Proctor Masonry, which he ran until he retired. In his free time, he enjoyed doing leather work, playing guitar, and fishing. He always enjoyed spending time outdoors. Norman was especially close to his family. Sister Janie recalled that on she and her husband’s first wedding anniversary he had to be away at “jump school”. Norman and some friends insisted that she not stay home but join them at the Cimarron Ball Room in downtown Tulsa for a night out on the town. Janie danced on her first wedding anniversary to George with her older brother, Norman. He also had a very dry wit and sense of humor. He would tease his nephews and nieces when they were young by telling them things like: “Mickey Mouse wears white gloves because he only has 4 fingers”, and he had one of his nephews convinced that a cockaburr was a “porcupine egg”. Norman will be missed by all who knew and loved him. He is survived by his son, Keith Proctor of Broken Arrow Sister, Janie and her husband, George Hartman, Jr. of Sand Springs Brother, Kenneth Proctor of Siloam Springs, Arkansas Brother, David Proctor of Tulsa And numerous nieces, nephews, and cousins Norman was preceded in death by his parents Byron and Bonnie Proctor, one sister Bonnie Jo Duke and her husband Bill Duke

Norman Edward Proctor was born in Eufaula, Oklahoma on Friday, July 17, 1936 to Byron Earl and Bonnie Grey (Shafer) Proctor. He passed from this life on Saturday, May 15, 2021 in Tulsa, Oklahoma at the age of 84. Norman was the third child... View Obituary & Service Information

The family of Norman Proctor created this Life Tributes page to make it easy to share your memories.

Norman Edward Proctor was born in Eufaula, Oklahoma on Friday,...

Send flowers to the Proctor family.