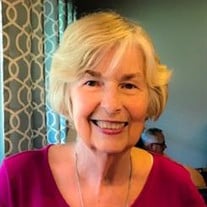 Norma Jean Welker was born in Covina, California on Wednesday, June 19, 1940 the baby girl with 4 older brothers to Lawrence and Opal (Macy) Mailes. She passed from this life on Monday, July 20, 2020 in Tulsa. Her family moved to Seneca, Missouri when she was still a toddler to be closer to their extended families. She attended schools in Seneca and graduated from Seneca High School on May 28, 1958 and married Norris Welker one day later. Since she was only 17 years of age, her parents had to sign the marriage certificate giving their permission and blessing. She and Norris were happily married for 62 years. She was able to be a stay at home mom until the children were settled in school. By that time, Norris had graduated from Law School, passed the bar, and began his practice in McAlester. Norma was his office manager for 15 years as they grew the practice. When asked about their mother’s hobbies, her children agreed that her family was her hobby. She loved cooking family dinners for her children, grandchildren, and great grandchildren. Not to say that they did not like to eat out. Her favorite was Mexican food, especially at El Tequila. One of Norma’s granddaughters thought she was Hispanic because that was her favorite place to eat. Norma was so proud of all her kids and was often told that she had the “best kids”. She never argued with that sentiment. She and Norris loved to travel. Her favorites were the beaches in Florida. Norma was often found bargain shopping. Some of her favorite places were Dillard’s, TJ Max, and Marshalls. She was a talented seamstress who made some of her children’s clothes when they were younger. She loved photography and became a certified photographer. Norma also loved selling jewelry. Always with an entrepreneurial spirit, she and a dear friend, Janie Nickles, started a jewelry business that they ran for several years. She was “Mimi” to her grands and greats and always told her family “I love you.” She adored babies and had a magic touch whenever she held one of them. One of her favorite sayings was, “This too shall pass.” She was a beautiful lady, both inside and out and will be missed by many. Norma is survived by: Daughter Sherri McElroy and her husband, Bowden of Broken Arrow Daughter Gina Howell and her husband, Richard of Houston, Texas Daughter Lori Gudgel of Tulsa Son Gregory Welker and his wife, Valerie of Broken Arrow Brother: Ron Mailes of Sherman, Texas Grandchildren: Kathleen Hilton, Kristeen Kidd, Dylan Howell, Brett Gudgel, Caroline Daggett, Kimberly McElroy, Brooke Gudgel, Brandon Howell, Carly Gudgel and Vivian Welker. Great Grandchildren: Paisley, Jentry, Conall, Clara, Wyatt, Avery, Macy and Declan As well as numerous nieces and nephews She was preceded in death by her parents: Lawrence and Opal Mailes, her husband: Norris Welker and three brothers: Eldon Mailes, Jim Mailes, and Roy Mailes

Norma Jean Welker was born in Covina, California on Wednesday, June 19, 1940 the baby girl with 4 older brothers to Lawrence and Opal (Macy) Mailes. She passed from this life on Monday, July 20, 2020 in Tulsa. Her family moved to Seneca, Missouri... View Obituary & Service Information

The family of Norma Welker created this Life Tributes page to make it easy to share your memories.

Norma Jean Welker was born in Covina, California on Wednesday,...

Send flowers to the Welker family.