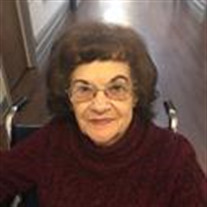 Norma Jean Todd (Anderson), 84, passed away peacefully on Saturday January 22, 2022, from a long and courageous battle with Alzheimer’s. Jean, as she was known by many, was born on June 25, 1937, the 3rd child and youngest daughter to William Roy and Kanzada Pauline Anderson of Tahlequah, OK. Jean grew up loving dancing, music, playing games, being outside in nature and taking care of others. That internal and external passion for helping others stayed with Jean all her life. Upon graduating high school in 1956, Jean attended nursing school. Jean became a switchboard operator/dispatcher at Northeastern State University while, simultaneously, working as a home health nurse. She retired in 2008, after doing what she loved for over 40 years. Over the course of her lifetime, Jean went on to have 3 wonderful children: Victor, Sabrina and David. Anyone who knew Jean knew that she loved her children with all her heart and that she had made many sacrifices for them. Jean became a grandmother to 8 grandchildren: Holly Jean (her namesake), Autumn Kanzada, Kristin Danielle, Joshua Richard William, Aaron Daniel, Brandy Michelle, Christopher Roy and Clayton Taylor. Having grandchildren rejuvenated Jean’s passion for helping. Her love for spending time and taking care of her grandchildren, among others, had met no bounds. Jean was a compassionate and generous person who never met a stranger (literally, she knew everyone). The simplest pleasures in life brought Jean joy. She loved fishing, camping (especially with her grandchildren), dancing to swing music, waterfalls, flowers, bird watching and spending time with her family and friends playing her favorite game: dominos. Her pleasant personality was contagious to everyone she met. She kept people rolling in laughter because she tended to find joy even in the most mundane things. Just ask her children and grandchildren about stopping alongside a busy highway to take pictures or pick flowers, or the “American Roosters” in Hawaii or her passionate love affair in enunciating everything. Jean was a one-of-a kind woman who was dearly loved and will be missed by so many. Her light may be gone from this world, but it burns on through those who knew her. Jean is proceeded in death by her parents, brothers William Lee and Dale Wayne, sister Wanda Pauline, son Victor Robert and grandson Christopher Roy. Jean is survived by her brother Anthony Anderson of Tahlequah, OK, daughter Sabrina and son-in-law Kenneth Todd of Wagoner, OK, son David and daughter-in-law Jodi Kennicutt of Coweta, OK, 7 grandchildren, 14 great-grandchildren and many other family members.

Norma Jean Todd (Anderson), 84, passed away peacefully on Saturday January 22, 2022, from a long and courageous battle with Alzheimer&#8217;s. Jean, as she was known by many, was born on June 25, 1937, the 3rd child and youngest daughter to... View Obituary & Service Information

Send flowers to the Todd family.