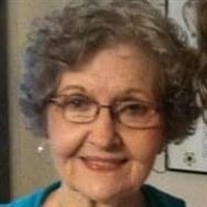 Norma Rae Lemon Arnold, 90, passed away, Thursday, September 16, 2021, surrounded by her family. She was born April 18, 1931 to Ray and Lela Dessie Lowery Lemon in Broken Arrow, OK. Norma was the third child/daughter born to Ray and Dessie. She attended Broken Arrow Public Schools graduating with the Class of 1949. She married Donald Mack Arnold on December 24, 1950, just 7-days before her beloved Don left for assigned duties with the US Army in Germany. They were not reunited until 17-months later. Don would joke with folks about squeezing the sweetest lemon ever for 70-years. He too would always celebrate holidays in bringing Norma yellow roses; being married and living in the City of Roses to the most beautiful wonderful woman in the world. Norma worked for the Tulsa County Social Services for 21 years and retired as Director of Social Services. Norma started attending Broken Arrow Assembly of God Church in 1942 and remained a faithful member until October 2017. She along with her devoted husband relocated to Grove, OK to Grandwood Assisted Living to be near her children Steve, Jimmy and Lori Arnold. Norma loved her family. She was so very proud of her children, grandchildren and great grandchildren. She loved to camp and love taking the grands with them often. She and Don would take long drives and would often take a picnic basket to city parks; they never met a stranger. Game night with friends and family was a must through the years. She was deeply involved with her church leading many of the trips for the Golden Agers Sunday School class at the Assembly of Broken Arrow. In her spare time, she loved to solve the Tulsa World crossword puzzles and was an avid reader. Norma is survived by her Husband, Don Arnold of Grove, Sons, Steve Arnold of Grove; Jimmy and wife Lori Arnold of Grove; Grandchildren David Edwards and wife Ashley of El Paso, TX; Jill Morris and husband James of Tulsa; Matt Arnold and wife Courtney of Tulsa, Chad Arnold and wife Mary of Arlington; TX, Corey Arnold of Grove, OK; Chris Arnold and wife Carrie of Huntsville, AL. And, 13 beloved great grandchildren. Norma is also survived by her Sister Pauline Eller of Broken Arrow, OK and her brother Onis Lemon and wife Susan of Topeka, KS and sister-in-law Nancy Lemon of Russellville, AR. Norma was preceded in death by her parents, her sisters Lorene Beckham, Virginia Crutchfield, brother LeRoy Lemon, niece Paula Sue Kirkpatrick, grandson Buddy Arnold and daughter-in-law Inger Arnold. Memorials may be made in lieu of flowers to The Mighty Oaks Foundation at mightyoaksprograms.org/donate.

Send flowers to the Arnold family.