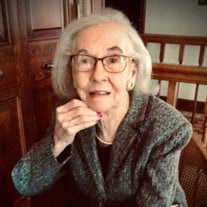 Neta Jean Watson (Lowder) was born February 7, 1928 and passed from this life on September 18, 2021 at the Montereau retirement community in Tulsa. She was the daughter of a pioneer Oklahoma Assembly of God pastor. She learned to play the piano at an early age and was the pianist at several of the small churches her father pastored throughout Oklahoma in her early life. She married the love of her life Bud Watson in 1945. He was in the oil field supply business and that sent them to live in Tulsa in 1961 where she lived for the rest of her life except for a two year period in Denver in the 1980’s. Jean had an excellent sense of style and fashion. She worked at Vandevers Department Store in Utica Square in Tulsa after spending years as a housewife and mother to her two sons. She left Vandevers to go to work for a few years at Miss Jackson’s. She also had a keen eye for interior decorating which led to working as a volunteer at Tulsa’s Philbrook Museum of Art for a few years. She was predeceased by her husband, Bud Watson, a son Kent Watson, her parents, Bill and Ethel Lowder, three brothers, Loyd Lowder, JD Lowder, and one sister, Geraldine Rogers, who all lived into adulthood. Three of her siblings, Joy L. Lowder, Raburn Lowder and Charles Lowder all died in childhood. She is survived by a son, Weldon Watson and wife Cheryle of Tulsa; daughter-in-law, Jan Watson of Fulshear, TX; and four grandchildren, Rodney Beard of Muldrow, OK, Jill Thompson of Fulshear, TX, Matt Watson of Bixby, OK, and Steve Watson of Broken Arrow, OK; and 7 great grandchildren. She was a woman of strong faith. Having been raised as a PK, preacher’s kid, she loved the church and her Lord and Savior, Jesus Christ. She spent a lifetime attending and supporting the work of the church. After 93 years of life she was eager to leave this earth and move to the blessed hope of life eternal with Christ. The family is deeply appreciative of the staff at Montereau and the St. Francis hospice team for the loving care given to Jean during her final days. The family will have a private memorial. Services are under the direction of Hayhurst Funeral Home, Broken Arrow, OK.

Neta Jean Watson (Lowder) was born February 7, 1928 and passed from this life on September 18, 2021 at the Montereau retirement community in Tulsa. She was the daughter of a pioneer Oklahoma Assembly of God pastor. She learned to play the... View Obituary & Service Information

The family of Neta "Jean" Watson created this Life Tributes page to make it easy to share your memories.

Send flowers to the Watson family.