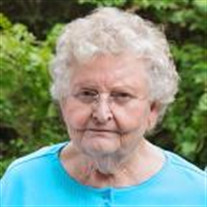 Neoma Deloris was born on Friday, February 26, 1932 in Stone Bluff, Oklahoma to Edward and Ruby (Plunk) Bostic. She passed from this life into the arms of her loving Savior on Sunday, May 2, 2021 at her home in Broken Arrow, Oklahoma at the age of 89. Neoma was the second to the oldest of four children, the only girl with three brothers. Her father was a carpenter, and her mother was a homemaker taking care of the children. Her father’s work led him to move his family to Arizona when Neoma was young. They lived there a few years before moving back to Broken Arrow, Oklahoma when she was in her early teens. She met and fell in love with Loyd Holladay while she was still in high school. She married him at the age of 17 on August 6, 1949 in Broken Arrow. They were happily married for 59 years until his passing in 2008. The two of them built a great life together here in Broken Arrow. Loyd went to work for American Airlines and spent evenings and weekends building houses. When he would finish one, the family would move into it for a couple of years, then they would sell it and he would build them another one. This went on for several years. They raised two sons and one daughter and stayed right here in the Broken Arrow area. Neoma was a wonderful mother and grandmother. She painted, quilted by hand, sewed clothes, and hosted all the family holiday get togethers. Neoma was a great cook. Roast was her specialty, but her family also enjoyed her coconut cake, cherry cobbler, Christmas candy, peanut brittle, divinity, and fudge. She loved playing all sorts of games with her grandchildren and would find creative ways to “let them win”. She would play “Sorry”, other card games, and Legos. Neoma also loved OU Football and Basketball as well as the TV show “The Young and The Restless” which she would record during the daytime and watch it in the evening. More than once she caught Loyd watching it as well. She also loved sorting through family pictures to see how much her children, grandchildren and great grandchildren had grown through the years. Her family meant everything to her. She will be missed by all who knew and loved her. Neoma is survived by daughter, Suzan Ready (Richard) of Broken Arrow Son, Danny Loyd Holladay (Glynnis) of Texarkana, Texas Daughter-in-law, Anita Holladay 4 Grandchildren: Andrew Turner (Nina), Angelique Zackery (Timothy), Chessa Helms (Matthew), and Alyssa Deloach (Clint) 17 Great Grandchildren: Kylie, Lucas, Macie, Samuel, Elijah, Ruby, Alyssa, Karlie, Cayden, Abbey, Josie, Naomi, Walter, Foster, Charlie, Ephram and Ezra She was preceded in death by her parents: Edward and Ruby Bostic, husband: Loyd Holladay, brothers: Hyman Bostic, Glen Bostic and Davey Bostic and son: Ronald Holladay

Neoma Deloris was born on Friday, February 26, 1932 in Stone Bluff, Oklahoma to Edward and Ruby (Plunk) Bostic. She passed from this life into the arms of her loving Savior on Sunday, May 2, 2021 at her home in Broken Arrow, Oklahoma at the... View Obituary & Service Information

The family of Neoma Holladay created this Life Tributes page to make it easy to share your memories.

Send flowers to the Holladay family.