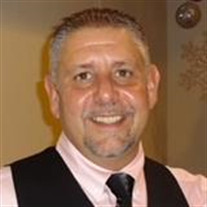 Neil Russell Dougherty was born on Thursday, April 10, 1969 in Brooklyn, New York the oldest of two sons to Robert and Mary (Morello) Dougherty. He passed from this life to his heavenly home with Jesus on Sunday, December 27, 2020 in Tulsa, Oklahoma. He was 51 years of age. The Dougherty family moved to New Fairfield, Connecticut when Neil was still in preschool and he spent all his youth there. He and his brother, Joel, were members of their hometown New Fairfield neighborhood “Ball Pond Crew”, spending time at the Ball Pond Beach or just at someone’s home. Neil played both baseball and basketball growing up and was a fan of the New York Yankees baseball team and the Dallas Cowboys football team. He graduated from New Fairfield High School in 1987. He married Joanna Rogers in 1994 and their two sons, Cody and Gabe, were his pride and joy. Neil worked for Del-Tron Precision in Bethel, Connecticut in the Operations Department for 13 years before moving his family to Tulsa, Oklahoma in 2002. In Tulsa, he remained in Operations Leadership roles, working for the NORDAM Group LLC and Spirit AeroSystems after owning his own business, Naturals Health. Neil brought his strong work ethic instilled by his father Robert in whatever job he was assigned. Neil was a strong man of faith and wanted his sons to know and follow Jesus. He enjoyed giving to others in many ways. Whether it was hosting celebrations at his house, giving of his resources, his time to help a friend in need, or to encourage others in their walk with the Lord, Neil received great joy from it. He was a very giving person who loved having company over to his home and entertaining friends. He stayed in touch with a large group of friends from Connecticut even though he hadn’t lived there for nearly twenty years. He will be missed by all who knew and loved him. The Dougherty family is grateful to everyone for their thoughts, prayers, support and memories of Neil. Neil's father, Robert is currently living with Dementia and our family has become more aware of memory care challenges. We have selected the Alzheimer's Foundation of America as our charity for those who are interested in supporting this wonderful cause as a gift in lieu of flowers: https://alzfdn.org/support-us/donate/ Neil is survived by- Son, Cody Dougherty and his wife, Holli of Tulsa Son, Gabriel Dougherty of Owasso Brother, Joel Dougherty of Tulsa Parents, Robert and Mary Dougherty of Tulsa

Neil Russell Dougherty was born on Thursday, April 10, 1969 in Brooklyn, New York the oldest of two sons to Robert and Mary (Morello) Dougherty. He passed from this life to his heavenly home with Jesus on Sunday, December 27, 2020 in Tulsa,... View Obituary & Service Information

The family of Neil Dougherty created this Life Tributes page to make it easy to share your memories.

Send flowers to the Dougherty family.