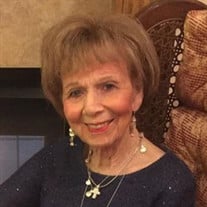 Nadine E. Dodd ​Funeral services for Nadine E. Dodd have been scheduled for 1:00 PM, Friday, June 12, 2020 at The Assembly in Broken Arrow, Oklahoma. Burial will be at Floral Haven Memorial Gardens under the direction of Hayhurst Funeral Home. ​Nadine Ella Fay Dodd was born Wednesday, September 5, 1923 in Burbank, Oklahoma, the daughter of Rev. B.B. and Viola Ann (Adams) Collins. She passed from this life on Sunday, June 7, 2020 at Mercy Hospital in Oklahoma City, Oklahoma. ​The former Miss Nadine Collins was a 1941 graduate of Varnum, Oklahoma High School. She was married to Doyce Dodd on March 27, 1943 in Seminole, Oklahoma. Nadine and Doyce lived in Seminole, Broken Arrow, Kansas City, Oklahoma City, and Tulsa. Doyce passed away in 1995. Nadine continued to live in Tulsa until December 2018 when she moved back to Oklahoma City to be close to family. Nadine was a homemaker, who worked beside her husband Doyce, becoming Diamond Direct Amway Distributors. Nadine loved to travel and was very competitive when playing any type of game. She enjoyed cooking, decorating her home, and visiting with friends. Her greatest joy came from spending time with her family. She was a member of The Assembly in Broken Arrow and had been involved with Harbor Lights and Forever Young. The family requests memorials to Forever Young at The Assembly, 3500 West New Orleans, Broken Arrow, Oklahoma 74012. ​She is survived by, Daughters,​​Karen and husband Bob Duncan, Edmond, OK ​​​Jan and husband Pete Pascuzzi, Garland, TX Grandchildren,​Angela and Todd, Regina and Ryan, Louis and Kelly ​​​Gianna and Clint, Anthony and Stephanie Great Grandchildren, Hunter, Hope, Regan, Morgan, P.J., Katelyn, Kinley, Stella, Heath, and Ava Sister,​​​Dorothy and husband Carl Martindale, Springfield, MO ​Nadine was preceded in death by her parents, Rev. B. B. and Viola Collins, her husband Doyce, brothers, Harold Dee and Don Collins.

Nadine E. Dodd &#8203;Funeral services for Nadine E. Dodd have been scheduled for 1:00 PM, Friday, June 12, 2020 at The Assembly in Broken Arrow, Oklahoma. Burial will be at Floral Haven Memorial Gardens under the direction of Hayhurst Funeral... View Obituary & Service Information

The funeral service of Nadine Dodd will be streamed live at https://vimeo.com/427483068

​Funeral services for Nadine E. Dodd have been...

Send flowers to the Dodd family.