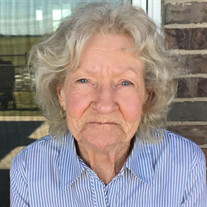 Myra June Kearney was born in Bartlesville, Oklahoma on Monday, February 23, 1931 to Theodore R. and Nona C. (Rinker) Bridges. She was the middle of three children. She passed from this life on Tuesday, April 13, 2021 at her home in Broken Arrow. Myra’s family moved to Tulsa when she was quite young, and she attended Roosevelt school. It was tough growing up in those years, but that toughness served her well her entire life. She met a young man who caught her fancy through family friends and she and Harold Kearney married on November 28, 1948 in Claremore, Oklahoma. They became parents to one daughter, Carolyn. Myra was a stay-at-home mother. She loved time spent with Carolyn, whether it was shopping, running errands, or attending Carolyn’s school activities. She was always supportive and encouraging as both a mother and grandmother. Once her two grandchildren were born, she loved spending as much time with them as possible. Their father called Grandma’s house “Club Paradise” because of the spoiling his kids received from Grandma. They would call her from the daycare they attended and say, “Grandma, come get us and take us to Quik Trip.” Their friends would often say, “Your grandma is so cool!” She would play outdoor games with them in warm weather and indoor games with them when it was too cold to play outside. In the 1970’s Myra and Harold enjoyed their Friday nights together, often going out to a club call “Vegas” listening to either live or juke box music and dance the night away. By the 1990’s until his death they made frequent trips to Las Vegas with friends to gamble and enjoy the night life of the city that never sleeps. Even in retirement, they cleaned a local optical shop together. The two were inseparable until his passing. Words her family used to describe Myra include independent, a heart of gold, generous and always concerned about others. She is survived by: Daughter, Carolyn Hemmert of Broken Arrow Grandchildren, Phillip Hemmert and his wife Tiffany of Collinsville Shanda Hacker and her husband Bryan of Broken Arrow Great Grandchildren, Jonah Garrison and his partner Sarah Pricer of Tulsa Josie Garrison of Broken Arrow Ryann Hemmert of Collinsville Harper Hemmert of Collinsville

Myra June Kearney was born in Bartlesville, Oklahoma on Monday, February 23, 1931 to Theodore R. and Nona C. (Rinker) Bridges. She was the middle of three children. She passed from this life on Tuesday, April 13, 2021 at her home in Broken Arrow. Myra&#8217;s... View Obituary & Service Information

The family of Myra Kearney created this Life Tributes page to make it easy to share your memories.

Myra June Kearney was born in Bartlesville, Oklahoma on Monday,...

Send flowers to the Kearney family.