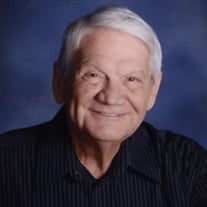 M.O. Neal Cozort was born in Drumwright, Oklahoma on Sunday, November 7, 1937, to Major Otho and Grace Lora (Heasley) Cozort. He passed from this life to his eternal home in heaven on Sunday, January 30, 2022, in Tulsa, Oklahoma at the age of 84. M.O. was the seventh of ten children born to the Cozorts’. He had six brothers and 3 sisters. He grew up in Shamrock as a youngster. His father died suddenly at 53 years of age leaving his mother to raise 10 children which she did with strength and love. During his youth the family moved to the Tulsa area, and he attended and graduated from Webster High School in 1957. During those high school years, he met and fell in love with Wanda Billingsly. The two were married on June 30, 1960, in Tulsa. M.O. enlisted in the U.S. Army in September of 1961 and proudly served protecting our country until September of 1967. Although he and Wanda were not able to have children, they were blessed to share in the raising of their 2 nephews, and niece, whom they dearly loved. M.O. was a home builder most of his life after returning from the service. He was a member of the Home Builders Association of Tulsa and a member of the Church of Christ. He was a loving husband to Wanda for 61 years and a loving father figure to their two nephews and niece. All would gravitate to him as he was not only kind and loving, but always the fun one in any group. He had a heart for the less fortunate, especially children and was always the first to lend a helping hand to anyone in need. Most of the time, wherever MO was, there were a group of kids laughing and having fun. His humor and empathy were the salve for many a wound in his lifetime. He will be missed by all who knew and loved him. Left to cherish his memory are wife, Wanda, of the home Nephew, Rickey Edmoundson (Laura) of Phoenix, Arizona Nephew, Mark Edmoundson (Brenda), of Bixby Niece, Shelley (Edmoundson) Travers of Tulsa Their children: Jacob Edmoundson, Elias Edmoundson, Grace Edmoundson, Nicholas Edmoundson, Gillian Edmoundson, Dawn Travers, Robert Travers, and Anna Travers Sister, Lora Moody (Don) of Tulsa Brother Ron Cozort (Raylene) of Holly Lake Ranch, Texas Brother Donnie Cozort of Tulsa Sister-in-law Jean Pinkston (Jim) of Tulsa Brother-in-law Eddie Billinglsy (Sherry) of Tulsa And nieces, nephews and cousins too numerous to name. Those who preceded him in death are his parents, brothers: James Cozort, Wayne Cozort, Calvin Cozort, and Jerry Cozort and sisters: Bernice Jones, and Priscilla Watson Flowers are appreciated or donations can be made in M.O.’s name to the National Junior Diabetes Research Foundation at https://www.JDRF.org

M.O. Neal Cozort was born in Drumwright, Oklahoma on Sunday, November 7, 1937, to Major Otho and Grace Lora (Heasley) Cozort. He passed from this life to his eternal home in heaven on Sunday, January 30, 2022, in Tulsa, Oklahoma at the age of... View Obituary & Service Information

M.O. Neal Cozort was born in Drumwright, Oklahoma on Sunday,...

Send flowers to the Cozort family.