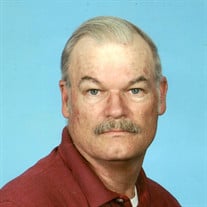 Michael Stewart Parsons was born Saturday, December 21, 1943 in Joplin, Missouri, the son of Stewart Charles and Violet Evelyn (Ashworth) Parsons, big brother to Linda and Ralph. He passed from this life on Saturday, August 29, 2020 at 76 years of age. His services will be under the direction of Hayhurst Funeral Home. Michael married the love of his life, Janice and had two children, Julie and Jeffrey. He enlisted in the Navy and built his successful career as an Avionics Technician. While in the Navy, Michael and family traveled the world including stays in Japan, Spain, and Cuba before settling in San Diego, California for over 25 years. In 2011, he moved to Broken Arrow, Oklahoma where he enjoyed being reunited with his sister and brother. He appreciated a good cigar or his pipe, spending many nights smoking, listening to music, and even traveling to see the solar eclipse with his brother Ralph. Michael was a very talented organist and he loved to play. In fact, he did regularly at the Trinity Lutheran Church, but he was also known to travel and play at different churches across the country. Michael loved animals, most of all snakes and dogs. His two dogs Lizzy and Tinkerbell were adopted from the Broken Arrow Animal Shelter and in lieu of flowers, the family is requesting donations to the Animal Shelter. Michael was a very loving and playful father and grandfather. He passed on his love of dogs, trivia, music, and tinkering to his kids and grandkids. He lived his life on his terms, devoted to his family and passions, and will live on in the hearts and minds of all he met. He is survived by Son, Jeffrey Parsons and Melyssa Sheeran of San Diego, California Daughter, Julie (Parsons) Demmer and John of Broken Arrow, Oklahoma Grandchildren, Charlie Parsons, Savannah Demmer, John Summers and Tyler Summers Sister, Linda (Parsons) Smith and Pat Brother, Ralph Parsons Preceded in death by parents and wife, Janice Parsons.

The family of Michael Parsons created this Life Tributes page to make it easy to share your memories.

Send flowers to the Parsons family.