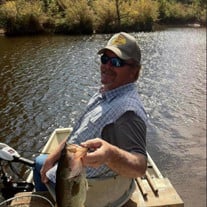 Michael “Mike” Howard Parks was born in Tulsa, Oklahoma on Friday, September 28, 1956 to Irene (Taber) Parks and her husband, Norman. He passed from this earth on Saturday, August 21, 2021 in Tulsa, Oklahoma at the age of 64, peacefully with his loved ones by his side. The family has entrusted services to Hayhurst Funeral Home. Mike spent his childhood in various areas of Oklahoma and California before his family settled down in Broken Arrow, Oklahoma in 1964. Mike graduated from Broken Arrow High School in 1975, the same year he met the love of his life, Jodi Groves. The couple married on September 17, 1976, and later had 2 children. Mike cherished being a husband, father and Papa. He often told stories about his family but was most proud of his ten beloved grandchildren. Mike was a skilled and dedicated electrician who enjoyed teaching and helping others. He was a talented singer and musician who loved bluegrass and gospel music and was known for playing the guitar, banjo, mandolin and dobro. Mike was an avid hunter and fisherman who spent much of his time in the great outdoors. He loved gardening and creating sculptures for his backyard oasis. Mike was an enthusiastic sports fan and loved rooting for the University of Oklahoma, the Dallas Cowboys and the Chicago Cubs. Mike is survived by his, wife, Jodi Parks of Broken Arrow, Oklahoma; daughter, Ashlee Beams and husband, Grant of Verdigris, Oklahoma; son, Brandon Parks and wife, Courtney of Sand Springs, Oklahoma; sister, Kristi Parks of Rosemary Beach, Florida; father, Norman Parks of Coweta, Oklahoma; grandchildren, Joy, Ella, Adlee and Linleigh Beams, Ethan Parks, Denver, Shelby and Piper Taylor, Natalie and Kennedy Hull. Mike was fiercely loved by all and will be missed by his family which includes a large extended family, friends and co-workers. He was preceded in death by mother, Irene Parks.

Send flowers to the Parks family.