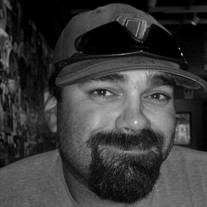 Michael Christopher Kula was born March 18, 1976 I Oklahoma City, Oklahoma. He departed this life on June 21, 2021 in Tulsa, Oklahoma. He grew up in Broken Arrow, Oklahoma and attended Broken Arrow Public Schools in his youth and formative years, wreaking havoc, having fun and making memories. His first attempt at college was at Northeastern State University, where he excelled at partying and Ballroom Dancing. He met his first love there and they married. Once reality hit, he joined the United States Army in an effort to do something he loved to do and was exceptionally good at doing. Being a soldier was his calling. After he spent many years serving his country, he moved to Tahlequah and became a paramedic. Again, something he excelled at, he impacted hundreds of lives and had a lot of fun doing so. He briefly attended Oklahoma State University, and had always been a Cowboy at heart. Making his way back to Broken Arrow, he continued being the Kula that he always was. His first marriage ended, but he was blessed with three children that he loved from that union. Back in Broken Arrow, he held various jobs, although none as meaningful to him as his time in the service or his time on the ambulance. However, no matter what he did, he always made the most of it and thoroughly enjoyed himself as well. He met his second love and they married, acquiring another child and also having three more children. He was a ‘Jack of all trades’, could fix any mechanical thing known to man, loved hunting, fishing and blowing things up. He is survived by parents, Rick & Tommie Kula, wife, Jaymee Kula, his children, Michael Garrett, Emilee Paullynn, Regan Lynn, Gunner Christopher, Ronin Gauge, Easton Jack and Olivia Sue, his sister & brother-in-law, Lisa & Brandon Groves, niece and nephew Anniston & Gavin, his dog Duke, and various aunts, uncles, cousins and friends for life. He is predeceased by his paternal grandparents, Emil & Louise Kula, his maternal grandparents, Kiowa & Ella Mae Paden, his brother-in-law, Anthony Gaden and his dog Beau.

Michael Christopher Kula was born March 18, 1976 I Oklahoma City, Oklahoma. He departed this life on June 21, 2021 in Tulsa, Oklahoma. He grew up in Broken Arrow, Oklahoma and attended Broken Arrow Public Schools in his youth and formative... View Obituary & Service Information

The family of Michael Kula created this Life Tributes page to make it easy to share your memories.

Send flowers to the Kula family.