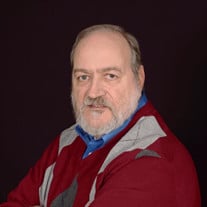 Michael Joseph Kiss was born to Louis Andrew and Mary (Timok) Kiss on Tuesday, January 18, 1955 in McKeesport, Pennsylvania. He died on Tuesday, May 19, 2020 in Tulsa, Oklahoma at the age of 65. A Funeral Mass for Michael will be live streamed 10 am, Tuesday, May 26 at https://vimeo.com/422452649 Michael grew up the middle of five children to devout Catholic parents in western Pennsylvania. He grew up in the parish of St. Stephen King of Hungary Roman Catholic Church, where he was an altar server and attended the parish school. As a boy growing up in the Pittsburgh area, one of Michael’s favorite pasttimes was attending baseball games at Forbes Field to watch the Pirates play. Michael and his brothers usually sat above right field hoping to catch the attention of the legendary Roberto Clemente. Sports were always a passion of Michael’s, and when he was in high school, he organized the first CYO chapter at his parish in order to form a basketball team to compete in the Catholic school league. Michael attended McKeesport Area Senior High School, graduating in the Class of 1972. After high school Michael attended Oral Roberts University in Tulsa, Oklahoma, first as a Theology Major and later as a Russian Language and Literature Major. It was at ORU where Michael met his future wife, Kimberly Wilkerson. Michael completed his studies at West Virginia University in Morgantown, earning a degree in Russian Language and Literature and Slavic Studies. After graduation, Michael and Kimberly were married at St. Stephen’s Episcopal Church in McKeesport and settled in the Chicago area, where they resided for 10 years and where he began his dynamic career in the fledgling field of information technology, first in the publishing sector, but later including the waste management industry, the 24/7 field of car rental, and culminating in state government. Michael was most recently employed as the Director for Information Technology for the Oklahoma Supreme Court. Michael’s unique qualities as an intelligent and visionary leader are but two of the traits for which he was known that allowed him to work successfully with multiple disciplines and across agencies to provide information services to the Oklahoma Supreme Court and the People of Oklahoma. Michael’s humble and patient servant’s heart are qualities for which he was well-known and for which he will be greatly missed, both by his employees and by the Court. Michael’s interests included reading non-fiction literature, primarily in the genres of American and World History and theology of the Roman Catholic Church. He earned a Masters of Theological Studies from the University of Dallas through the Pastoral Studies Institute and served as an adjunct instructor teaching New Testament. Mike was pleased several of his students have since become permanent deacons in the Diocese of Tulsa. Another of Michael’s great passions was cooking. His family’s Hungarian heritage provided a rich background where meals were the foundation of family and community gatherings. At an early age Michael learned to cook and enjoyed time in the kitchen preparing meals for family and friends, especially for holiday gatherings. Michael and his family have been long-time parishioners of the Church of St. Benedict in Broken Arrow, for which he was grateful. His life-long desire to please and be obedient to God’s call on his life has been a guiding force in every aspect of his life. He was most thankful for God’s blessings of marriage and family, whom he loved with his whole heart. Michael is survived by His wife, Kimberly of Broken Arrow Son, Andrew Kiss of Broken Arrow Daughter, Gloria Henderson and Son-in-law Brian of Broken Arrow Grandchildren, Christopher and Victoria Henderson Brother, Louis Kiss, Jr. and Joyce of Harrison City, Pennsylvania Sister, Veronica Eddy of North Huntingdon, Pennsylvania Brother, John Kiss and Denise of Liberty Boro, Pennsylvania Brother, Robert Kiss of Columbus, Ohio And numerous nieces, nephews, and cousins Michael was preceded in death by his parents, Louis and Mary (Timok) Kiss

Michael Joseph Kiss was born to Louis Andrew and Mary (Timok) Kiss on Tuesday, January 18, 1955 in McKeesport, Pennsylvania. He died on Tuesday, May 19, 2020 in Tulsa, Oklahoma at the age of 65. A Funeral Mass for Michael will be live streamed... View Obituary & Service Information

Send flowers to the Kiss family.