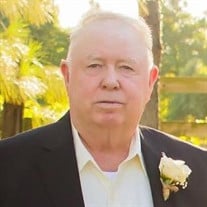 Michael Lee Gordon was born in Tulsa, Oklahoma to parents, C.G. and Aubrey Lee (Sutterfield) Gordon on Saturday, October 4, 1941. He passed in Broken Arrow, Oklahoma on Friday, June 25, 2021 at the age of 79. Services are under the direction... View Obituary & Service Information

The family of Michael L. Gordon created this Life Tributes page to make it easy to share your memories.

Send flowers to the Gordon family.