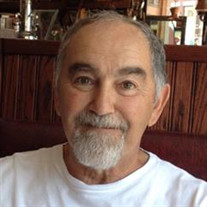 Michael Douglas Gallo was born in Jamestown, New York on Sunday, October 29, 1950, to Anthony and Hazel (Eck) Gallo. He passed from this life to his eternal home in heaven on Monday, December 27, 2021, at his home in Broken Arrow, Oklahoma. Mike was one of five children born to the Gallo family. He grew up in Jamestown and Salamanca, New York and attended school primarily in Salamanca. He graduated from high school there in 1968. Shortly after that, he joined the U.S. Navy during the Vietnam War era where he served from 1969-1973. Mike graduated with his bachelor’s degree from Cornell University in 1978. He married in 1979 and became the father to two daughters. He worked as the Human Resources Manager for Rich Dairy Products for over 30 years until his retirement in 2005. He married Anne Dolecki on June 5, 2004, in Las Vegas, Nevada, and was blessed with one stepson and one stepdaughter. Hobbies that Mike enjoyed including golf, especially with lifelong friends Kevin Vail, Daryl Gilman, and Brad Brown, as well as restoring antique radios, collecting old Salamanca postcards, and attending Buffalo Bills football games. He also enjoyed camping and traveling. Left to cherish his memory are wife, Anne Gallo of the home in Broken Arrow Daughter, Shane Gallo (Matthew Fain) of Spartanburg, South Carolina Daughter, Amy Gallo (Kyle Brown) of San Diego, California Stepson, Andrew Occhuizzo (Sharon) of Coweta Stepdaughter, Marianne McClain (Patrick) of Coweta Grandson, Roman Fain Step Grandchildren, Rylee McClain, Jaxon McClain, and Sophia Occhuizzo Sister, Nancy Brown (Bill) of Maryland Brother, Steven Gallo (Ping) of West Virginia Brother, Greg Gallo (Cheryl) of New York Brother, Chris Gallo (Sarah) of New York He was preceded in death by his parents, Anthony and Hazel Gallo A Graveside Service will be held in Spring, 2022 at Calvary cemetery in Salamanca, New York

Michael Douglas Gallo was born in Jamestown, New York on Sunday, October 29, 1950, to Anthony and Hazel (Eck) Gallo. He passed from this life to his eternal home in heaven on Monday, December 27, 2021, at his home in Broken Arrow, Oklahoma.... View Obituary & Service Information

The family of Michael Gallo created this Life Tributes page to make it easy to share your memories.

Send flowers to the Gallo family.