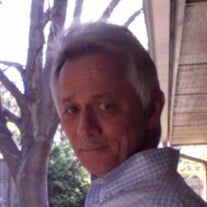 Michael G. Barber was born on June 16, 1960 and passed in Tulsa, Oklahoma on June 16, 2020. He was 60 years of age. Services will be held at 11:00a.m., Monday, June 22, 2020 at Hayhurst Funeral Home. Michael was born in Tulsa, Oklahoma to Morris and Joan (Cockreil) Barber. He was one of three children. He was a high school graduate and went on to obtain a Bachelor of Arts in Business Administration from Berkeley College in 1980. He was a veteran and proudly served in the United States Navy. Michael worked for and retired from Boeing Aircraft and then was self-employed for 15 years as a tribal contractor for the government. Michael met the love of his life, Cheryl Thomas and they married in Hawaii on August 5, 2016. They had two children and three “bonus” children. He loved his family dearly. Michael loved going on road trips and taking his granddaughter on softball trips. He was an avid OSU fan. He also enjoyed racing side by side, boating and overall just experiencing life! He is survived by his wife, Cheryl Barber Son, Lance and wife, Renee of Tulsa, Oklahoma Daughter, Taylor and husband, Mark Ginther of West Virginia Bonus children Kyle Thomas of Arkansas, Ashton LaRue of Oklahoma and Kaitlyn and her husband, Jon Pilcher of Washington Grandchildren, Brody Barber, Blair Ginther, Josie Thomas, Bracken Thomas, Kooper Thomas, Brantley Pilcher, Eastyn Pilcher, Brayden Wiles, Avery Wiles and Corbin Pelts He was preceded in death by his parents, brother, Gary Wayne Barber and sister, Catherine Cordova

Send flowers to the Barber family.