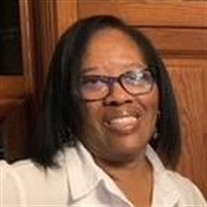 Melanie Anita Marion was born on Friday, October 5, 1962, in Newport News, Virginia to Bobby Lee, Sr. and Shirley Mae (Barrett) Burch. She passed from this life to her father’s house in heaven on Tuesday, June 22, 2021, in Tulsa, Oklahoma at the age of 58. She was one of four children. Two brothers and one sister who she loved all dearly. Melanie was from a large family, raised by her grandmother at the age of 3 and was quiet and was a rare breed, as a child, while the others enjoyed home cooked extravagant full course meals all Melanie really wanted was a salad and could not wait until she was old enough to have just that. Melanie attended school in Suffolk, Virginia and graduated in 1980 from Forest Glenn High School. She gave birth to two daughters, Krystle and Courtney. She loved being a mom and most of all a grandma. She adored her grandchildren and while she tried to make the cute name “MeMe” stick they simply called her just “Grandma” which she grew to love. Words her children used to describe their mom are, strong, caring, faith-filled and a woman of God. Courtney and Krystle’s Favorite Memory “Mom was always looking out for our best Interest. One time Courtney fell out of the back seat of her Buick LeSabre. The door did not get shut tightly and as she made a left turn Courtney went flying out of the car. Fortunately, the car was not going extremely fast when this happened and although Melanie kept driving just a little to be safe, before the car could get to a complete stop, Courtney had already jumped back in, feeling distressed and confused. She asked her mom why she kept driving, Melanie simply said, “I didn’t want to run over you!” To where Courtney replied, “I thought you were leaving me.” She professed her faith in Christ at the age of 25 when she was active in St. Paul RZUA (Reformed Zion Union Apostolic Faith) Church. Where she received her ordination as Minster under Bishop Edward P. Foreman. They then later moved as a family to Broken Arrow, Oklahoma in 2006 when Melanie enrolled in the Rhema Ministry Program and graduated from Rhema two years later in 2008. Her calling was in the areas of Outreach and Evangelism. In 2009, Melanie went to work at Cancer Treatment Center in Tulsa and continued her career there caring for many patients and their families as a Medical Clerical Specialist until CTCA had to close their doors in 2021. Melanie fought her battle with cancer multiple times. Through several surgeries and treatments, she never lost hope nor her faith, for she knew that the battle would be won with any outcome she would quite often say, “It’s a win-win, For me to live is Christ, and to die is gain” (Philippians 1:21). She will be missed by all who knew and loved her. She was a true disciple for Christ. She is survived by Daughter, Krystle Bertrand of Bixby, Oklahoma Daughter, Courtney Brown of Bixby, Oklahoma Mother, Shirley Boykins of Suffolk, Virginia Brother, Bobby Burch, Jr. of Suffolk, Virginia Brother, Christopher Burch of Portsmouth, Virginia Sister, Yvette Burch of Baltimore, Maryland 6 Grandchildren; Brandon Yulee, Domanic Bertrand, Ronni Brown, Daireon Brown, JaCari Brown, and Nadiah Brown And a special brother in Christ, Daryl Hartzler She was preceded in death by her father, Bobby Burch, Sr. and grandmother, Elizabeth Barrett

Melanie Anita Marion was born on Friday, October 5, 1962, in Newport News, Virginia to Bobby Lee, Sr. and Shirley Mae (Barrett) Burch. She passed from this life to her father&#8217;s house in heaven on Tuesday, June 22, 2021, in Tulsa, Oklahoma... View Obituary & Service Information

Send flowers to the Marion family.