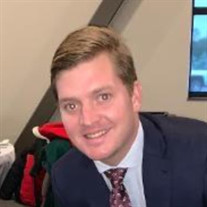 Matthew Jared Holman was born in Little Rock Arkansas on February 8, 1988 and passed from this earth on January, 2022. His parents Craig and Karen Holman and sister, Kristie Vinson moved back to Broken Arrow soon after. Matt graduated from Broken Arrow High School in 2006 where he was involved in many school athletic endeavors and school organizations. He was awarded with the National High School Heisman Award and graduated with many honors and scholarships. He went on to attend the University of Arkansas Sam Walton Honors college earning a degree in Finance in 2010 with Summa Cum Laude recognition. He went on to receive his Juris Doctor from the University of Arkansas School of Law with Magna Cum Laude distinction. He was a member of the Arkansas Law Review, served on the executive committee of the Student Bar Association and was honored with the Charles Thomas Pearson Fellowship and Scholarship for ethics. He also received the School’s Business Law Certificate and worked as a Legal Research and Writing teaching assistant. Matt was a member of Sigma Chi Fraternity, Tulsa Country Club, the Oklahoma Bar Association and was a practicing transactional attorney. In Matt’s spare time he was actively serving the Tulsa community through a variety of non-profit positions, including serving on the boards of Iron Gate and Lawyers Fighting Hunger. Matt had a tender heart for those less fortunate and helping animals. His family meant the world to him and he loved spending time with his niece and nephew Sam and Charlie. He loved being their uncle. He was an avid golfer, loved to fish and hunt, and enjoyed Crossfit with his friends. Matt is survived by his parents, Craig and Karen Holman, his sister Dr. Kristie Vinson and husband Dr. Chris Vinson, niece and nephew Samuel and Charlie Vinson of Tulsa, Grandparents Kenneth and Charlene Holman of North Little Rock Arkansas, Aunts and Uncles, Roger and Connie Sanford & Jon and Kellie Blanton of Broken Arrow, Keith and Terry Holman of Longview Texas, Sandy Wagner and Ed Wagner of Tulsa. And his cousins, Rob & Stacy Smith, Thomas Sanford, Zach & Meridith Blanton, Alex & Jennifer Hammer, Brad & Travis Glen, Blake Holman, Braden, Eden, Michael and Nathan Wagner. He is preceded in death by his Grandparents Ken and Gretta Dugan of Broken Arrow. In lieu of flowers, Matt would have wanted contributions made to Iron Gate of Tulsa or Oklahoma Alliance of Animals. Irongatetulsa.org

Matthew Jared Holman was born in Little Rock Arkansas on February 8, 1988 and passed from this earth on January, 2022. His parents Craig and Karen Holman and sister, Kristie Vinson moved back to Broken Arrow soon after. Matt graduated from... View Obituary & Service Information

The family of Matt Holman created this Life Tributes page to make it easy to share your memories.

Send flowers to the Holman family.