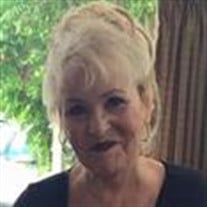 Maryann Teresa Griffith was born on Friday, August 2, 1946 in Santa Monica, California to Samuel and Ione (Ash) Hozman. She passed from this life to her heavenly reward on Friday, June 18, 2021 in Tulsa, Oklahoma at the age of 74. Maryann was the third of four children born to the Hozmans’, two boys and two girls. Their father was a butcher and mother a full-time homemaker. Maryann was close with her siblings, but made her own way, even at an early age. She was the captain of her school Drill Team, graduating from high school in 1964. Although her first marriage did not last, it did result in the blessing of three daughters and a son. Described by her children as “a trailblazer of a woman” after the breakup of the marriage, Maryann worked hard to provide for and raise her family as a single mother. Somehow, they always had enough. She always had her kids’ back, was fiercely protective and proud of each of them. Son, Marc, said his mother always called him “her favorite son”, not mentioning the fact that he was her only son. For hobbies, Maryann played doubles tennis and fell in love with Yorkie dogs. She had six of them at one time, all adopted from a local Yorkie Rescue group. Maryann met Fred Griffith in 1995 and when he saw her, he knew she was the love of his life. And she knew when she saw Fred’s runner’s legs, she was smitten. They were married in Eureka Springs, Arkansas two years later September 20, 1997. The two began attending LifeChurch together. Her children, now all grown, were so happy that their mother had found a man who loved her unconditionally and took care of her. If anyone ever deserved that happiness, it was certainly Maryann. Words and phrases her family use to describe Maryann are “5 feet of fury”, one who never met a stranger, loving and supportive. She adored her blended family of now 6 children, 17 grandchildren and 1 great grandchild. Maryann had special nicknames for each of them and was called “Bubbe” by her grands, which means grandmother in the Hebrew language. She will be missed by all who knew and loved her. Maryann is survived by her husband, Fred of their home in Tulsa Daughter, LaRae Ludwig and her husband Steve of Tulsa Daughter, Erin Allison of Oak Point, Texas Son, Marc Dobbs and his wife Crystal of Prosper, Texas Daughter, Briana Anderson and her husband Eric of Murphy, Texas Stepdaughters, Jennifer Griffith and Sarah LaFavers Sister, Cecelia Hozman of Utah 17 Grandchildren, Austin Ludwig, Aiden Allison, Holden Allison, Jadon Dobbs, Madison Dobbs, Emma Ludwig, Ashlyn Ludwig, Colten Gott, Ella Dobbs, Gage Gott, Samantha Anderson, Morgan Anderson, James Anderson, Morgan Burnett, Freddie Burnett, Wesley LaFavers, and Evelyn LaFavers and 1 great grandson, Kaiston She was preceded in death by her parents, Samuel and Ione Hozman; two brothers, Thomas Hozman and his wife, Carol and Michael Hozman and his wife Michele

Maryann Teresa Griffith was born on Friday, August 2, 1946 in Santa Monica, California to Samuel and Ione (Ash) Hozman. She passed from this life to her heavenly reward on Friday, June 18, 2021 in Tulsa, Oklahoma at the age of 74. Maryann was... View Obituary & Service Information

A Private Family Memorial Service is being planned.

Send flowers to the Griffith family.