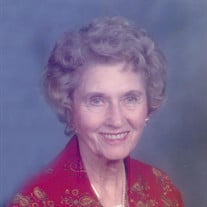 Mary Sue Lewis Logan was born January 10, 1921 in Wilson OK, the eldest child of a prominent Oklahoma rancher, Leo B. Lewis, and his wife Wynne Lewis. Throughout her life Mary Sue was proud of her ranching and livestock knowledge and it served her well in her later career in real estate. She celebrated her one hundredth birthday with family and friends before passing from this life January 29, 2021. She graduated from then Oklahoma A&M University (OSU) in Stillwater in 1942. She was a member of Chi Omega Sorority and maintained life-long and cherished friendships with her sorority sisters. She met Jim Logan, her husband-to-be at A&M and they married in June 1942. Several months later 2nd Lt Logan was deployed to the South Pacific Theater and it would be four long years before they saw each other again. World War II was the defining event of their lives and they both embodied the steadfastness and valor of the Greatest Generation. They were married for seventy-four years until Jim's death in 2017. Mary Sue began her real estate career with Ralph Sanders Real Estate in Broken Arrow. She maintained an active presence in Broken Arrow and Tulsa real estate for over fifty years. She completed her career at Berkshire Hathaway and was a well-respected and loved member of the real estate community. Mary Sue's deeply held Catholic faith was central to her life. She and her husband moved to Broken Arrow in the mid-fifties and joined St. Anne Catholic Church, one of only twelve families. She watched with astonishment as St. Anne grew to its current robust size. She is survived by six children and their spouses: Susan and George Palmer, Tulsa OK; Jimmy and Claire Logan, Broken Arrow OK; Lewis and Carolyn Logan, Broken Arrow OK; Steve and Laura Logan, Raleigh, NC; Stan and Pam Logan, Greenwood, AR; Gabe and Kathryn Logan, Marquette, MI Additionally, she is survived by eight beloved grandchildren and nine great-grandchildren. The family would like to thank Brookdale Cedar Ridge Assisted Living. While living there Mary Sue made new friends, enjoyed the activities, loved and was loved by the residents and staff. Hospice of Green Country gave her excellent and tender care in her last days. “Honor her for all that her hands have done, and let her works bring her praise at the city gate.” Proverbs 31:31 Memorial donations may be made to: Catholic Charities, 2450 N. Harvard Ave, Tulsa OK 74115 or Hospice of Green Country, 1120 S. Boston Ave, Ste 200, Tulsa OK 74119 or the charity of your choice. Viewing will be on Monday, February 8, 12:00-8:00 PM with Visitation from 4:00-6:00 PM at Hayhurst Funeral Home in Broken Arrow. A Private Family Funeral Mass is scheduled that same week. Interment will be at Floral Haven Cemetery.

Mary Sue Lewis Logan was born January 10, 1921 in Wilson OK, the eldest child of a prominent Oklahoma rancher, Leo B. Lewis, and his wife Wynne Lewis. Throughout her life Mary Sue was proud of her ranching and livestock knowledge and it served... View Obituary & Service Information

The family of Mary Sue Logan created this Life Tributes page to make it easy to share your memories.

Send flowers to the Logan family.