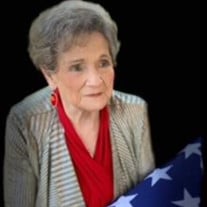 Mary Shackleford was born as Mary Alice Jones on Sunday, October 7, 1934 in Vian, Oklahoma to William and to Telitha (Cashion) Jones. She joined her husband, Jim, in the heavenly realms on Monday, February 22, 2021 at the age of 86 years old in Tulsa, Oklahoma. Services will be directed by Hayhurst Funeral Home. Mary was a very intelligent young woman and was very fond of learning. She graduated high school and became an elementary school teacher for Broken Arrow Public Schools, along with other school districts. She continued her education and obtained her Master’s Degree in education. She belonged to the Alpha Delta Kappa Teachers Sorority. Mary met a fine young man named Jim and they fell in love and married on April 2, 1954 in Muldrow Oklahoma. They were happily married until his death on June 22, 2020. They raised four children. Their family multiplied to include several grandchildren and eventually numerous great-grandchildren. One of Mary’s favorite past-times was going to games and watching the grandkids play in different sports. She loved them all dearly, as they did her. She will be greatly missed! Mary was a devout Christian lady and attended the First Baptist Church in Broken Arrow. She had a lovely voice and sang in the ‘Living Long and Loving It’ choir. She loved writing and was a published author. She was talented in arts and crafts and enjoyed making things with her hands. Mary is survived by, Daughter, Peggy Ann Hale and Don of Broken Arrow, Oklahoma Daughter, Cindy Bracken and Don of Broken Arrow, Oklahoma Son, Rick Shackelford and Peggy of Broken Arrow, Oklahoma Son, Scott Shackelford and Julie of Broken Arrow, Oklahoma Grandchildren, Jessica and Jason, Ranee and Kris, Rebecca and Nigel, Kyle and Kelsey, Keli and David, Stephanie and Dave, Holli and Marcus, John and Kristy, Matt and Ashely, Patrick and 21 great-grandchildren Sisters, Joann Swafford Katie Kerr and Vernon Brother, Charles Jones and Kathy She was preceded in death by husband, Jim Shackelford, brother, Paul Jones, and sister, Jenette Brenzovich. In lieu of flowers, please consider donations to the First Baptist Church of Broken Arrow Building Fund.

Mary Shackleford was born as Mary Alice Jones on Sunday, October 7, 1934 in Vian, Oklahoma to William and to Telitha (Cashion) Jones. She joined her husband, Jim, in the heavenly realms on Monday, February 22, 2021 at the age of 86 years old... View Obituary & Service Information

Send flowers to the Shackelford family.