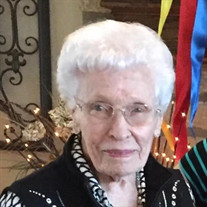 Bea Jordan was born Mary Elizabeth Keller on Wednesday, July 27, 1921 in Broken Arrow to Orvil and Geneva (Baker) Keller. She passed away on Friday, October 30, 2020 at Bellarose Senior Living in Broken Arrow. Bea and her brother, Melvin, grew up in Broken Arrow. She was involved in FFA and showed prize winning livestock while there. She graduated from Broken Arrow High School in 1939 as the Salutatorian of her class. Immediately after graduation she read in the newspaper where an employee of the First National Bank of Broken Arrow had died. She went in, applied, and got the vacant job. She worked there a few years and then had the opportunity to go to work for Sun Oil Company in Tulsa as an Executive Secretary where she worked until she took early retirement at the age of 58 in 1979. Bea married Lewis Fisher on August 3, 1942 until his death in December 1994. She then married Enoch Jordan on March 19, 1995 until his death in May 1997. Not burdened by many hobbies, she did show prize-winning German Shepherds in her 30’s and 40’s and enjoyed helping her brother, Melvin, milking on his dairy farm. They remained remarkably close as sister and brother until his death in 2019. She also mowed 40 acres at her home in Broken Arrow until she turned 90. Bea is survived by: Stepdaughter, Cathy Anderson and her husband, John of Olathe, Kansas Honorary Daughter, Kay Keller of Jenks Honorary Grandson, Jason Weilacher and his wife Heather of Jenks Honorary Great Grandson and light of her life, Matthew Weilacher Nephews, Stan Keller and his wife, Rita Alan Keller and his wife, Loretta Russell Keller She was preceded in death by: her parents, Orvil and Geneva (Baker) Keller, Brother, Melvin Keller and two husbands: Lewis Fisher and Enoch Jordan.

The family of Mary Jordan created this Life Tributes page to make it easy to share your memories.

Send flowers to the Jordan family.