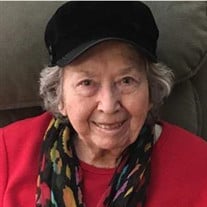 Mary Jean Croke was born on Monday, March 26, 1928, in Kansas City, Missouri and adopted as an infant by Oliver and Pansy (Presley) Funk. She passed from this life to the next on Tuesday, August 3, 2021, in Broken Arrow, Oklahoma at the age of 93. “Jean” as she became know to all who knew her grew up in California and Arkansas. She attended school and graduated from high school in Bentonville, Arkansas in 1945. Jean met a boy who stole her heart by the name of Earl Leeroy Croke and the two were married on February 25, 1946, after he returned from serving in the U.S. Navy during World War II. They became the parents of two sons. She enjoyed time with Earl at the racetrack and they were married for 25 years until Earl’s early passing in 1971 at the age of 45. She raised her boys as a single mother, never remarrying. Jean was a wonderful mother and provided for them doing office work and eventually going to school to become a beautician. She was a devout Mormon and was a member of the Church of Jesus Christ of Latter-Day Saints here in Broken Arrow, where she was involved in mission work with her church. Jean was a fun grandmother and enjoyed spending time with her 5 grandchildren and 6 great-grandchildren whenever she could. You could often find her playing card games like Skipbo with friends from the apartment complex where she lived. She also enjoyed bowling as a hobby. She missed the Arizona weather and always longed to return there someday. Jean was a generous giver of anything she had. She will be missed by all who knew and loved her. Left to treasure her memory are sons James “Rusty” Croke (Lynn) of Inola and Erick Croke (Jeanne) of Broken Arrow one Stepbrother Herman Smith (Liz) of Hiwasse, Arkansas 5 Grandchildren: James Rusty, II (Angela); Addie Schemel (Tony); Jessup Reid Croke; Dustin Martin (Holly); and Megan Sutter (Kelly). 6 Great Grandchildren: Koltyn Morel; Bryce Croke; Trention Croke; Jaxen Croke; Gabby Sutter, and Kellen Martin She was preceded in death by her parents, Oliver and Pansy Funk and her husband, Earl Leeroy Croke.

Mary Jean Croke was born on Monday, March 26, 1928, in Kansas City, Missouri and adopted as an infant by Oliver and Pansy (Presley) Funk. She passed from this life to the next on Tuesday, August 3, 2021, in Broken Arrow, Oklahoma at the age... View Obituary & Service Information

The family of Mary "Jean" Croke created this Life Tributes page to make it easy to share your memories.

Send flowers to the Croke family.