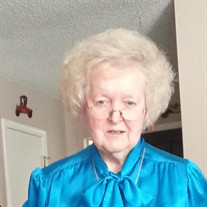 Services will be streamed live on our website 2 pm, Tuesday, April 14 at https://vimeo.com/406354120 Private funeral service for Mary Anderson has been scheduled for Tuesday, April 14, 2020 at the Hayhurst Funeral Home Chapel. A public Viewing will be on that same day, from 11:00 AM – 1:00 PM. Mary Anderson was born on Friday, January 30, 1942 in Montevideo, Minnesota, the daughter of Kenneth and Thelma (Vandervoort) Bartlett. She passed from this life on Thursday, April 9, 2020. She was 78 years of age. Mary grew up in Minnesota, graduated from high school then attended Brainerd Community College earning a certificate as a Licensed Practical Nurse. She worked in hospitals while the family lived in Minnesota and then the City of Faith Hospital after they moved to Oklahoma. Mary was married to the Rev. Dennis Anderson on August 12, 1961 in Saint Paul, Minnesota. There they became the proud parents of two sons, Christopher and Andrew, and one daughter, Heidi. The family has many wonderful memories of Mary as wife, mother and grandmother. Some of these include living on the lake, camping as a family, playing board games and working puzzles together. Mary was a great cook, especially known for her spaghetti sauce. She had a “green thumb” and could literally grow anything. She was an accomplished seamstress, sewing clothing, draperies, and even made she and Dennis down jackets one winter. She loved animals of every variety, and owned at different times dogs, cats, goats, chickens, rabbits and one sheep. She told her children she always wanted 49 horses (not just one or even 50, but 49) but could never give them a reason why. She was a true people-person always interested in others. She kept bookmarks in her Bible of missionaries so she could remember to pray for them. Mary was a soft-spoken, gentle soul who loved to laugh. She will be missed by her family and many friends. Mary is survived by, Husband, Rev. Dennis Anderson of Broken Arrow Daughter, Heidi and Roger Hess of Broken Arrow Son, Christopher and Betty-Jo Anderson of Catoosa Son, Andrew and Jeanie Anderson of Apple Valley, Minnesota Grandchildren, Brittni and Jason Cedar of Broken Arrow Steffen and Brittnay Hess of Bartlesville Tiffani Hess of Broken Arrow Jonathan and Rebecca Anderson of Broken Arrow Katelyn and Dayton Weatherford of Carrollton, Texas Caleb and Jessica Anderson of Kuwait Ryan Anderson of Los Angeles, California Kirsten and Joel Willenbring of Apple Valley, Minnesota Kelsey Anderson of Apple Valley, Minnesota Jaclyn and Matthew Schmeichel of Burnsville, Minnesota Great-Grandchildren: Madelynne, Royce, Vera, Kodie, Brooklynn, Hunter and Hazel Mary was preceded in death by: Her parents: Kenneth and Thelma Bartlett, one brother: Kenny, Jr. and two sisters: Bonnie and Nancy

Services will be streamed live on our website 2 pm, Tuesday, April 14 at https://vimeo.com/406354120 Private funeral service for Mary Anderson has been scheduled for Tuesday, April 14, 2020 at the Hayhurst Funeral Home Chapel. A public Viewing... View Obituary & Service Information

Services will be streamed live on our website 2 pm, Tuesday,...

Send flowers to the Anderson family.