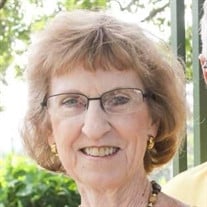 Martha Rhea Hamm was born on May 14, 1943, in Checotah, OK, the third of five children to Marie and Elijah (E.W.) Hamm. She passed this life at Heritage Point of Tulsa on Thursday November 18, 2021. She was 78 years of age. In the 1950’s the family moved to Checotah where Martha attended Longfellow Elementary and Checotah Jr & Sr High Schools. During her high school years music became a big part of her life. Immediately after graduation in 1961, she attended Northeastern State College in Tahlequah. In October of that year, she met Dolman Lee (Buddy) Harmon of Tulsa who was also attending Northeastern. They met each other while attending the Assembly of God Church there in Tahlequah on a Sunday evening. Without notice Martha was asked to sing a special that night. After the service Buddy came to her and told her he enjoyed her song and then walked out the back door. Martha was talking with the pastor’s daughter, but also quickly existed to find this young man. She had already spotted him in the choir when she arrived a few minutes late for service. She ended up taking him back to campus. That was the beginning of a relationship that grew quickly as they married two years later in 1963. Martha dropped out of college in June 1963 to work while Buddy completed his degree. She became employed as a private secretary to the Controller of Griffin’s Grocery Company in Muskogee, OK. In November of that year, she was married to Buddy Harmon. In January 1966 they moved to Tulsa where Buddy started his teaching career. A daughter, Michelle Lynne, was born in July 1966. Two sons were born: Jeffrey Charles in May 1969 and Jeremy David in February 1971. The 2-1/2 years they were in Muskogee they attended Central Assembly of God Church with Conrad Barrett as the pastor. In 1966 their membership was transferred to Trinity Assembly of God in Tulsa with Otho Allen as the pastor. It was after the birth of their daughter, Michelle, that Martha accepted the position of Nursery Supt., a position she felt God called her to fulfill. She continued with her love for music by singing solos, with a lady’s trio and in the choir. In 1971 the five Harmons became members of Capitol Hill/Woodlake Assembly of God. Martha soon recognized the need of nursery organization here, and she set to work again. She also joined the choir and continued to sing for the glory of God. In 1974 she accepted employment as a teacher’s aide with the Union Public Schools. After 2 years at Grove Elementary she was asked to take the secretary position for the District Media Director at the Administrative Center. She remained there for 8 more years spending the last two years driving back and forth to Tahlequah to complete her degree in Library Science with a minor in Business Administration. In April of 1987 she received a call to come and help with organizing a small property management company called Case & Associates that had taken a sudden growth. By August Martha had proven herself to be such a big asset for the company that the Exec Vice President asked her to become his personal administrative assistant. She retired from Case & Associates in 2010. Martha was presided in death by her Parents, E.W. and Marie, sister, Naomi. She leaves her husband, Buddy, of the home; Daughter, Michelle and husband Bill Adams of Tulsa, OK; Sons, Jeff and wife Dawn Harmon of Wichita, KS, Jeremy and wife Berny Harmon of Tulsa, OK; Grandchildren, Kylie and edgar, Courtney and Shane, Abigail and Landon, Ethan, Grant, Dylan and Devin; Greatgrandchildren, Lexi and Korbin; Two sisters Anna Wilson & Rachel Bess, Brother David and wife Sharon Hamm, plus a host of cousins, nieces & nephews.

Send flowers to the Harmon family.