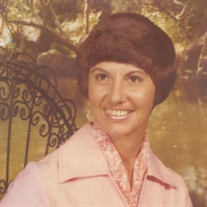 Marie Brown was born in rural Wallace, North Carolina on Tuesday, August 25, 1936 the youngest of six children to Nollie and Emma Lee (Browder) Skipper. She passed from this life on Monday, August 31, 2020 in Tulsa. Marie grew up on her parents’ farm in rural North Carolina and learned the value of hard work from her parents. Her father also owned a grocery store where she and her siblings all worked through the years. She excelled in both the numbers side of the business as well as her people skills. She attended school and graduated in 1954 from Magnolia, North Carolina High School. During those growing up years she met a young man by the name of Elvin “Monk” Brown who would become the love of her life. His career kept them in North Carolina for the first several years, but they migrated west and landed in Broken Arrow, Oklahoma in 1972. “Monk” worked in the construction business and built the home where they lived until his death in 2018. Marie lived there until about a year ago when she needed additional care. Marie’s mother was a great cook and passed those skills on to her daughter. She was famous with her family for her fried chicken, big breakfasts on Sundays, and her Christmas candy, especially her peanut brittle. She and “Monk” would host large family Christmas parties where she would display her collection of over 300 Santa Claus’s. They also loved the lake and made many memories with their family at the lake property at Eufaula. And Marie was the best fisherwoman (or man) in the family. They were long time members of First Baptist of Broken Arrow. She loved her Lord, her family and friends and will be missed by many. In lieu of flowers, please consider a donation to Alzheimer’s Association of Tulsa – 2448 East 81st Street, #3000, Tulsa, OK 74137 or go to www.alz.org for more information. Marie is survived by: Sister Dorothy Torrans of Wallace, North Carolina Son Tony Brown and his wife, Sherri of Broken Arrow Grandchildren: Arin Cline and her husband, Chris of Broken Arrow Jacob Brown of Broken Arrow Jodie Bean and Brad Spillers of Broken Arrow Lauren Bradley and her husband, Ed of Broken Arrow Austin Gray and his wife, Caisie of Jackson, Tennessee Evan Gray and his wife, Sarah of Chattanooga, Tennessee 9 Great Grandchildren and numerous nieces, nephews, and cousins She was preceded in death by her parents, Nollie and Emma Lee; her husband of 61 years, Elvin “Monk” Brown; two sisters, Ida Browder and Gloria Miller; two brothers, N.J. Skipper and R.W. Skipper and her daughter, Libby Gray In lieu of flowers, please consider making a donation to: Alzheimer's Association of Tulsa 2448 East 81st Street, #3000 Tulsa, OK 74137 www.alz.org

Marie Brown was born in rural Wallace, North Carolina on Tuesday, August 25, 1936 the youngest of six children to Nollie and Emma Lee (Browder) Skipper. She passed from this life on Monday, August 31, 2020 in Tulsa. Marie grew up on her parents&#8217;... View Obituary & Service Information

Send flowers to the Brown family.