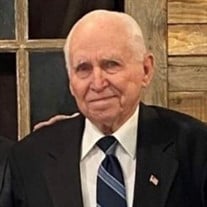 Lyle Alden Davis went to be with the Lord at the age of 89 on April 16, 2022. He was born January 1, 1933, in Wichita, Kansas. Lyle was the son of Lawrence Levi and Edna (Jones) Davis. He attended and graduated from Douglass High School (class of 1950) in Douglass, Kansas. He was drafted into the United States Army in 1952 and sent to the Korean War, returning home in 1954. He was honorably discharged from the Army Reserve Corp in 1959. Lyle attended Oklahoma A&M (OSU) in Stillwater and graduated in 1957. He married Darleen “Dot” (Gordon) Davis on May 1, 1959 and was happily married for 39 years until her death in March 1999. Lyle and Dot had moved to Torrance, California and worked at Douglas Aircraft Company. They moved to Broken Arrow, Oklahoma in November 1967. Lyle began working at American Airlines in 1968 until his retirement in May 1996, after 28 years. Lyle and Dot started a rental house business in 1978, over time acquiring 17 homes, a 9-plex, 5-plex, 4-plex, and a duplex. These were liquidated and the remainder passed on to his son, Lamar Davis in 2017. During his retirement years you could always find him camping down at Rocky Point (Fort Gibson Lake) each summer. He loved to fish his juglines for catfish and spend time with family and friends. Lyle also loved to travel, whether for vacation, hunting with his family or his buddy “Doc” (Howard Schneider). After the death of Lyle’s wife, “Dot”, he found companionship for the remainder of his years with Betty Haines. They traveled, fished, and experienced their senior moments together, both good and bad. He is survived by his companion, Betty Haines Son, Lamar Davis Son-in-Law, Al Stoddard Nieces: Brenda Davis Houser (Paul) Rita Yarbrough Spires (Mike) Granddaughter Morgan Davis Stephens (Cody) Grandsons: Macoe Davis, Andrew Windle (Stacia), Matthew Partee (Amber) 7 Great Grandchildren: Cam, Swayzee, Sean, Bailee, Lorelia, Kaiden and Hadley He was preceded in death by his parents: Lawrence and Edna Jones Davis; brother, Leslie Davis; sister, Norma Yarbrough, wife Darleen “Dot” Gordon Davis; daughters Linda Davis and Tina Davis Stoddard. Lyle loved his family and friends and will be missed by all that had the honor of knowing him. We were blessed to have the time we had with Lyle. His humor, his stories, and his compassion will be missed but never forgotten.

Lyle Alden Davis went to be with the Lord at the age of 89 on April 16, 2022. He was born January 1, 1933, in Wichita, Kansas. Lyle was the son of Lawrence Levi and Edna (Jones) Davis. He attended and graduated from Douglass High School (class... View Obituary & Service Information

Lyle Alden Davis went to be with the Lord at the age of 89 on...

Send flowers to the Davis family.