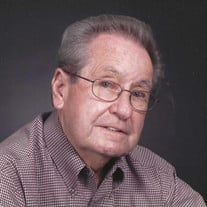 Luther “Leon” Bagwell was born in Broken Arrow, Oklahoma on Friday, September 12, 1930, to Alonzo and Flossie (Jones) Bagwell. He passed from this life to his eternal reward in heaven on Tuesday, February 15, 2022, in Tulsa, Oklahoma at the age of 91. Leon was one of four children born to the Bagwell’s. He attended Central High School in Tulsa. Leon joined the U.S. Army in March of 1951, serving two years active duty and then transferred to the Army Reserves in February of 1953 for an additional three years until 1956. After marriage, he became the father of one son and one daughter. Leon went to work for McDonell Douglas Aircraft in Tulsa and retired from there as a Structural and Installation Planner. After retirement from MDC he worked for Enterprise Car Rental for another 20 years, retiring for a 2nd time at 85 years of age. He married Wanda (Crass) Coleman on August 19, 1989, in Tulsa, Oklahoma and was blessed with an additional stepson and stepdaughter. His main hobby through the years was racing motorcycles. Leon and Wanda were active members of Arrow Heights Baptist Church in Broken Arrow, and he was a 32nd Degree Mason. He will be missed by all who knew and loved him. Left to cherish his memory are wife, Wanda, of the home in Broken Arrow Son, Jimmy Bagwell (Kim) of Sand Springs Daughter, Jeannie Bagwell of Tulsa Brother, Charles Bagwell of Tulsa Sister, Norma Bagwell of Salinas, California Stepson, Kent Coleman (Teresa) of Bixby Stepdaughter, Darla Fulton of Broken Arrow 5 Grandchildren: Melodie, Deon, Justin, Brandon, and Bryan Brother-in-law & Sister-in-law Carol & LaDonna Crass He was preceded in death by his parents, Alonzo and Flossie, brother Johnny Bagwell And first wife Ruby.

Luther &#8220;Leon&#8221; Bagwell was born in Broken Arrow, Oklahoma on Friday, September 12, 1930, to Alonzo and Flossie (Jones) Bagwell. He passed from this life to his eternal reward in heaven on Tuesday, February 15, 2022, in Tulsa, Oklahoma... View Obituary & Service Information

Send flowers to the Bagwell family.