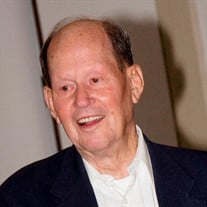 Louis Winfrey ​Louis Donald Winfrey was born Thursday, July 23, 1925 in Knot Hole, Oklahoma, the son of Jennings Leroy and Ora Mae (Harrison) Winfrey. He passed this life on Monday, September 7, 2020. He was 95 years of age. ​Louis was a 1943 graduate of Cameron High School. He was married to the former Miss Earline Fry on July 4, 1946 in Fort Smith, Arkansas. She preceded him in death on August 20, 2017. Louis worked for MPW (Motive Parts Warehouse) for 25 years and his final position was Vice President of Operations. He enjoyed Golf, Baseball, Checkers and Dominos. He was also an avid St. Louis Cardinal Fan. He was a workaholic who always had to stay busy. Louis was a member of Garnett Road Baptist Church in Tulsa. ​He is survived by, Sons,​​​Ken and wife Karen Winfrey, Tulsa, OK ​​​David Winfrey, Broken Arrow, OK Grandchildren, ​Joshua and Eileen ​​​Brooke and Nico Great Grandchildren, Abby and Charlotte Great Niece, Brooke Feranna Many other friends and loved ones ​Louis was preceded in death by his wife, Geneva Earline, his parents, Jennings Leroy and Ora Mae, a sister, Helen Winfrey Feranna Chance, and a nephew, Randy Feranna. ​ ​

The family of Louis D. Winfrey created this Life Tributes page to make it easy to share your memories.

Send flowers to the Winfrey family.