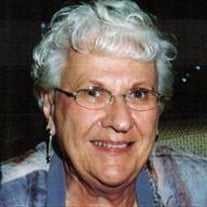 Loretta Della (Martisus) Kern Vanderkolk was born in Chicago, Illinois on Tuesday, December 22, 1931, to Charles J. and Della (Nasvit) Martisus. She passed from this life in Tulsa, Oklahoma on Monday, May 9, 2022, at the age of 90. She was the third of three daughters born to the Martisus couple. Loretta’s grandparents migrated over from Lithuania. Her father was a machinist in a battery factory and her mother worked in a sausage factory in Chicago. The girls attended Casimir Academy and Loretta graduated in 1949. She was described as a girl who often found mischief, she loved to play music and dance. She became the mother of four children. Loretta was married twice but continued her life filled with entertaining in her home, loving on her children and grandchildren and enjoying all sorts of games, especially Bunko. Loretta loved the beaches. Her two favorites were Shoal Bay in Anguilla and Sanibel Island in Florida. You always knew where you stood with her, but she was also loving, caring, fun and feisty. When one of her family would bring up an issue in their life she was quoted as saying, “Give God a break, He has His Hands Full!” Loretta was a wonderful cook. Her Lithuanian Dumplings and Sour Cream Twists were two of her family’s favorites. She was an active member of The Church of Saint Benedict here in Broken Arrow. She will be missed by all who knew and loved her. Left to cherish her memory are Son, Don Kern, and his wife, Diane of Broken Arrow Daughter, Regina Morgan, and her husband, Darell of Owasso Daughter, Karen Spradlin of Tulsa Grandchildren: Stephanie Cox (Brent), Brian Schouten (Annie), Vanessa Swainston, and Melissa Bartz (Andrew) Great Grandchildren: Christian Lewis, Mackenzie Lewis-Zeigler, Braden Cox, Bryson Cox, Braxton Cox, Hayden Schouten, Kinsley Schouten, Eto Morgan, and Reef Stephens Nieces: Maureen Kern, and Jackie Robinson Nephews: Rick Kern Tommy Trojanowski, Terry Kern, Cary Kern, and Gary Kern Those who preceded her in death are her parents, Charles and Della Martisus, husbands, Donald Henry Kern and Ty Vanderkolk, sisters, Sophie Trojanowski and Annie Faulk, daughter, Susan Kern and grandson, Chad Castleberry

Loretta Della (Martisus) Kern Vanderkolk was born in Chicago, Illinois on Tuesday, December 22, 1931, to Charles J. and Della (Nasvit) Martisus. She passed from this life in Tulsa, Oklahoma on Monday, May 9, 2022, at the age of 90. She was... View Obituary & Service Information

The family of Loretta Vanderkolk created this Life Tributes page to make it easy to share your memories.

Send flowers to the Vanderkolk family.