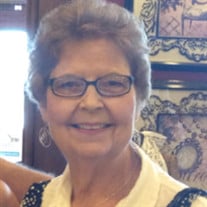 Loretta Faye Self, aged 66, died peacefully on July 15, 2016 after a brief struggle with cancer. Loretta was born September 27, 1949, in Muskogee, OK, the daughter of Bill Baroli and Marvell Baroli. Loretta graduated from Muskogee High School and attended Connors State College. Loretta enjoyed spending time with family and friends. She was fond of quilting, paper crafting and being involved at the senior center. Her greatest joy was being a Nana to her grandchildren, Ella and Evan. In April 1969, Loretta married the love of her life Kenneth Self, and they continued to live in Muskogee, OK. Loretta worked in federal service for more than 35 years. Loretta is survived by her husband Kenneth Self; daughter, Jenny Griffin and husband Jarrett, grandchildren Ella and Evan of Edmond, OK; son Josh Self and wife Lindsy of San Francisco, CA; her mother, Marvell Baroli of Broken Arrow, OK; sister, Betty Barton of Dallas, TX; several other loved family members. There will be a memorial service held July 30, 2016, 2:00 PM at Aspen Park Baptist Church. In lieu of flowers, memorial donations can be sent in her name to Aspen Park Baptist Church, 4400 S. Aspen Ave., Broken Arrow, OK 74011.

The family of Loretta Faye Self created this Life Tributes page to make it easy to share your memories.

Send flowers to the Self family.