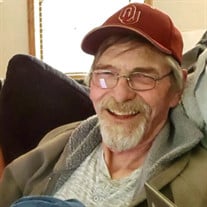 Lonnie Ray Pearson was born on Sunday, June 21, 1953 in Broken Arrow, Oklahoma to Leon Meko and Verna Virginia (Keele) Pearson. He moved on to greener pastures Saturday, August 21, 2021 from Tulsa, Oklahoma at the age of 68. Services are under the direction of Hayhurst Funeral Home. Lonnie went to school in Broken Arrow and graduated in 1972. He met the love of his life, Lynna Fulps, when they were just kids, and they married in Miami, Oklahoma on June 29, 1981. His favorite things to do were spend time with his Lynna, his children and grandchildren, work with his cattle and play with his Yorkies. They raised 6 children together and their family continues to grow. Lonnie was a hard worker all of his life. He was Plant Manager at Pro-Quip for years, and before he retired he was Owner of Pearson Grocery & Deli located in Broken Arrow. Lonnie was a cowboy and had a knack for training horses. He was a bull rider when he was younger, and when not on the back of the bull, he was clowning around in front of the bulls to help keep the riders safe after dismounting. Lonnie was fond of outdoor activities. He liked to ‘coon’ hunt, and he loved to coach/watch his daughters’ softball games, as well as his sons’ sporting events, and when it came to college football – BOOMER SOONER! In lieu of flowers the family would like donations to American Cancer Association https://www.cancer.org. He is survived by, Wife, Lynna Pearson of Broken Arrow, Oklahoma Daughter, Erin Davis of Tulsa, Oklahoma Son, Jake Kelley of Broken Arrow, Oklahoma Daughter, Lindsey Pearson of Haskell, Oklahoma Daughter, Lacey Pearson of Broken Arrow, Oklahoma Son, Cody Pearson & Amber of Coweta, Oklahoma Daughter, Misty Pearson of Houston, Texas Grandchildren; Nikole Meier, Colt Meier, Chance Kelley, Chase Kelley, Kodie Overose, Shya Overose, Kash Overose, Ryker Coughran, Mylee Matos, Zoe Harrison, Liam Bloss, Zane Bloss, Silas Bloss, Vincent Pearson, Zac MacMoy, Luke MacMoy, Maddie MacMoy Brother, Ron Pearson and Family, Coweta, OK Preceded in death by parents.

Lonnie Ray Pearson was born on Sunday, June 21, 1953 in Broken Arrow, Oklahoma to Leon Meko and Verna Virginia (Keele) Pearson. He moved on to greener pastures Saturday, August 21, 2021 from Tulsa, Oklahoma at the age of 68. Services are under... View Obituary & Service Information

Send flowers to the Pearson family.