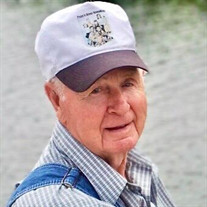 Funeral services for Lonnie McEntire have been scheduled for Wednesday, June 24,2020, at Broken Arrow Baptist Temple, 2701 E. Albany, Broken Arrow, OK. Pastor Greg McEntire, Lonnie’s son, will officiate. Gravesite services and burial will follow at Vernon Cemetery in Coweta, Oklahoma, under the direction of Hayhurst Funeral Home. Lonnie Lee McEntire was born the son of Homer and Amanda (Baker) McEntire on Sunday, July 28, 1929, in Bruno, Arkansas. He passed away at his home on Saturday, June 20, 2020, at the age of 90. Lonnie served in the Army from October, 1950 – November, 1951, during the Korean War. He married his bride, Emma Geraldine Doggett, known as “Gerri”. They raised two sons. Lonnie was a hardworking man. He was a welder by trade and retired from Paul Mueller Company, Springfield, Missouri, in 1982. Upon moving to Broken Arrow, he started building custom homes until retiring from that occupation. He very much enjoyed the outdoors and spent time fishing and hunting. He loved the Lord and served him faithfully at Broken Arrow Baptist Temple in many capacities until his death. Lonnie is survived by his two sons, Greg and wife, Kay of Coweta, Oklahoma, and Roger and wife, Cindy McEntire of Branson, Missouri. Grandchildren are: Michelle Jones, Brenton McEntire, Bryant McEntire, Gregory McEntire, Nathan McEntire, Kim Williams, Justin McEntire, their husbands or wives, and 29 great-grandchildren. He has three sisters, Marie Edmondson, Nelda Sasser, and Joan Gieseke. He was preceded in death by his parents and wife, “Gerri”. In lieu of flowers, the family would like memorials made to Broken Arrow Baptist Temple P.O. Box 1197 Broken Arrow, OK 74013

Funeral services for Lonnie McEntire have been scheduled for...

Send flowers to the McEntire family.