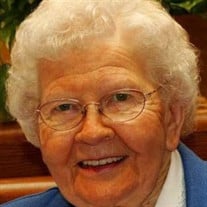 Lois E. (Palmquist) Hamilton was born August 29, 1922, in Oakland, Nebraska, the daughter of Leonard E. and Esther (Johnson) Palmquist. She attended District 33 Palmquist Grade School. She graduated from Oakland High School May, 1939. Lois graduated from Van Sant Business College, Omaha, Nebraska and worked as a Secretary for Grove Real Estate Co., in Omaha until she entered Ottawa University in the fall of 1944. After graduating from Ottawa in May of 1948, she taught 3rd grade at Shawnee Grade School, Shawnee, Kansas, for four years. Lois married J.W. Hamilton on June 19, 1949 in Shawnee. In June, 1952, they moved to Omaha, Nebraska, where J.W. was Director of Christian Education for First Baptist Church. Lois served as secretary and Director of Children’s Church. They also served at churches in Fort Wayne, Indiana, Parsons, Wichita and Hutchinson before moving to Topeka, Kansas in 1969. Lois was President of the Ministers Wives’ Fellowship of the Kansas Baptist Convention for several years during that period. Lois started teaching school again in Topeka and taught 2nd grade in the Topeka Public Schools for 13 years before retiring in 1985. Lois and J.W. retired to Prairie Homestead Retirement Center in Wichita in 1992. She was a member of West Side Baptist Church in Wichita and was the President of West Side Baptist American Baptist Women for several years. In the early retirement years, Lois and J.W. enjoyed camping in their RV and taking their grandchildren on special trips around the country. For the past 5 years, they have lived at Greentree Assisted Living in Sand Springs, OK to be closer to family. She is survived by her husband, J.W., 3 sons; Stuart (Stephanie), Wayne (Kyra), Gary (Robyn), 9 grandchildren; Jamie (Brant), Tara (John), Dustin (Emily), Darcy (Brett), Ryan (Britt), Trent (Laura), Shannon, Cory and Emily and 11 great-grandchildren; Luci, Logan, Levi, Croy, Maxson, Navy Jo, Garrett, Kaile, Blake, Peityn and Harper.

The family of Lois Hamilton created this Life Tributes page to make it easy to share your memories.

Send flowers to the Hamilton family.