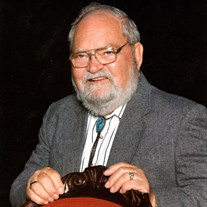 Lloyd Stewart, of Broken Arrow, soared home like an eagle to meet our Father in Heaven on Saturday, January 16 at the age of 89 after battling dementia and various health conditions for many years. A graveside service honoring his life will be held at 12 Noon, Monday, January 25 at Fort Gibson National Cemetery. Friends may visit Lloyd at the funeral home Sunday, January 24 from 2-6 pm with the family receiving friends from 4-6 pm. Lloyd was born Thursday, March 19, 1931 in Ponca City, OK to Clark (CH) and Hazel (Anderson) Stewart. On May 2, 1953, Lloyd married the love of his life, Frances in Ponca City and their union was blessed with three children, son Roger and daughters Elaine and Tammy. Lloyd was the oldest of 3 siblings. His mother was a seamstress, and his father was the union steward at the Conoco refinery in Ponca City. Lloyd was always a good student. He loved cars and even traded his bike for a car when he was 14. He was also a good brother. So much so that his sister introduced him to Frances, and they were married 6 months later. He loved going on camping trips with the kids and taught them to water ski at Keystone and Ft. Gibson Lakes. He loved riding his motorcycles and owned the first Kawasaki 900 and Kawasaki 1100 in Tulsa. He spent many hours driving his Triumph TR4 convertible. He and Frances loved to go dancing, he loved to fish, watch western movies, and has a large collection of Eagle memorabilia. Survivors include: Wife Frances Stewart of the home Son Roger and wife Pam Stewart of Colleyville, Texas Daughters Elaine and Jerry Crow of Broken Arrow Tammy Stewart of Tucson, Arizona Grandchildren Karen Wells and husband Zac Kimberly Adams Andrew Stewart and wife Arlissa Douglas Stewart and wife Emily Great Grandchildren Kaleb, Aria, Alana, Aliyse, Adaline, Isabella, and Alaric Lloyd is predeceased by: Parents Clark and Hazel Stewart Sister Esther Porter Brother Rev. Charles Stewart Memorials may be made to Wreaths Across America at https://donate.wreathsacrossamerica.org.

Lloyd Stewart, of Broken Arrow, soared home like an eagle to meet our Father in Heaven on Saturday, January 16 at the age of 89 after battling dementia and various health conditions for many years. A graveside service honoring his life will... View Obituary & Service Information

The family of Lloyd Stewart created this Life Tributes page to make it easy to share your memories.

Lloyd Stewart, of Broken Arrow, soared home like an eagle to...

Send flowers to the Stewart family.