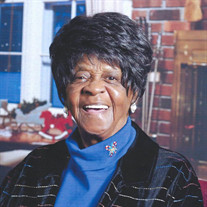 Lillie Bernice Holden Brown Ferby went home to be with Jesus on February 12, 2021 at age 88. Lillie was born to Ed and Frankie Holden on March 3, 1932 in Dunn, North Carolina. As a child, Lillie began playing the piano at 5 years of age. She loved playing the piano and did so up to her passing. Many people loved to hear Mother Brown worshipping the Lord on her piano because she did it with much passion! Lillie had four children. . .Oliver Tyrone, Carmen Yvonna, Torrance Maurice, and Terrell Antonio. . .whom she greatly loved and poured herself into. Her children often refer to her as the perfect example of unconditional love. In the early 1960's, Lillie moved from Dunn, NC with her children to New Haven, CT where she raised them with much love as a single parent. After her children had grown up, Lillie was now able to focus her love on carrying out God's call on her life. . .caring for people. Mother Brown touched the lives of many, many people in and around New Haven, CT with the love of Jesus. Lillie's passion for the Lord was so strong that she became an ordained minister in 2001. Shortly thereafter she met Deacon Nelson Ferby and the two married in 2006. They worked in the ministry together until they moved to Tulsa, OK in 2012 to be closer to two of her children. . .Carmen and Torrance. Lillie will be fondly remembered, by those who got a chance to interact with her, as a person that poured out love and caring in such abundant quantities to everybody! Lillie was predeceased by her loving husband Nelson, and her first-born child Oliver Tyrone. Lillie is survived by her three other children - Carmen and husband Gilibert Noel, Torrance and wife Lynette Brown, and Terrell and wife Doretha Brown - and then 9 grandchildren, and 8 great grandchildren. Lillie is also survived by many who called her Mother Brown Ferby because she treated them as if they were her own children with the love that only a mother could give. Mother Lillie, you will forever be alive in our hearts!!! Lillie's family will be holding an in-person memorial service at 1520 West Fulton Place, Broken Arrow, OK 74012 on Wednesday, March 3, 2021. The service will also be streamed at http://bit.ly/MotherLillieCelebration

Lillie Bernice Holden Brown Ferby went home to be with Jesus on February 12, 2021 at age 88. Lillie was born to Ed and Frankie Holden on March 3, 1932 in Dunn, North Carolina. As a child, Lillie began playing the piano at 5 years of age. She... View Obituary & Service Information

Lillie's family will be holding a virtual memorial service for her on Wednesday, March 3, 2021 at http://bit.ly/MotherLillieCelebration

Send flowers to the Ferby family.