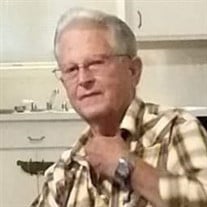 Hobert “Lee” Rigney was born in rural Kentucky on Sunday, September 11, 1938, Shebb and Opal (Stinson) Rigney. He passed from this life to his eternal home in heaven on Saturday, August 14, 2021, in Tulsa, Oklahoma at the age of 82. Lee’s family moved from Kentucky to Illinois when he was a small child. He attended school in Auburn, Illinois and graduated from Auburn High School in 1956. Immediately after graduation Lee joined the U.S. Navy and served from 1956-1960. Following his time in military service he married and became the father of three children, one son and two daughters. He moved his family from Illinois to Broken Arrow, Oklahoma in 1981 to attend Rhema Bible Academy where he graduated in 1982. He was a guest speaker at many area churches and taught Adult Sunday School at a church in Muskogee. Lee was musical, playing guitar, banjo and harmonica playing mainly bluegrass gospel music. He also played on the Worship Team at Coweta Assembly of God Church. He was a stern but loving father to his children, taking them camping and fishing at area lakes. He will be missed by all who knew and loved him. Left to cherish his memory are son, Rick Rigney (Cindy) of Broken Arrow Daughter Becky Massey (Tony) of Tulsa Sister Virginia Kunz of Springfield, Illinois Brother Jack Rigney (Jan) of Petersburg, Illinois 9 Grandchildren: Darin Nicholson, Sarah Lopez, Daniel Rigney, Anna Rigney, Whitney Cosgrove, Megan Smith, Trent Massey, Jonmichael Rigney, and John Mark LaScelle. And 15 Great Grandchildren Those who preceded Lee in death are his parents, daughter, Trudy Rigney, Grandson, Nathaniel Michael Rigney, Granddaughter Sarai Langford, and Great Grandson, Michael Nathaniel Rigney. In lieu of flowers the family requests donations in Lee’s name to Wounded Warrior Project at www.woundedwarriorproject.org/donate or Veterans of Foreign Wars at www.vfw577.org

Send flowers to the Rigney family.