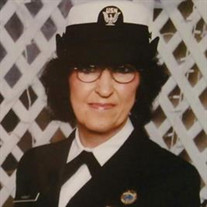 Laveda Mae Haas was born on Wednesday, September 29, 1943 in Broken Arrow, Oklahoma, one of six children to Cleo and Loma (Holt) Wheeler. Her family moved to Oregon when she was in Junior High School. She grew up close with her siblings. She met Ralph Haas while they were in high school and they married soon thereafter. Laveda gave birth to three children, two sons and one daughter. She loved every part of being a mom. After her marriage to Ralph ended, she and her children moved back to Broken Arrow in 1972 to settle down and make roots. She did secretarial work for both the city of Broken Arrow and the city of Tulsa until she found her true vocational passion in sales/advertising. Laveda worked as an account executive for a several different radio stations in the Tulsa area, including KVOO, KICK 99 and more. Her gift of gab and natural ability to make friends allowed her to succeed in sales. In 1986, at the age of 43, Laveda joined the U.S. Navy as a Reservist. It was very unusual to be allowed to join the Navy reserves past the age of 40. She proudly served for 20 years upon retirement in 2006. She loved traveling once a year to both Hawaii and San Diego, as well as to Japan. She enjoyed training the Sea Cadets, who are young female reservists. She “mothered” them but got the job done at the same time and was both loved and respected by those women under her leadership. Laveda was always proud to say she had earned Top Secret Clearance while in the U.S. Navy Reserves. Laveda was a member of the American Legion in Tulsa and a longtime member of the Assembly of God church in Broken Arrow, raising her children to know and love the Lord. She was a lot of fun and a big cutup. She will be missed by all who knew and loved her. Laveda is survived by: Son, Ed Haas and his wife, Cindy of Sand Springs Daughter, Christy Walton and her husband, Darren of Broken Arrow Son, Mike Haas and his wife, Cindy of Broken Arrow Brother, Carl Wheeler and wife, Marty of Broken Arrow Brother, Ron Wheeler of Washington Sister, Debbie Wheeler of Broken Arrow 7 Grandchildren: Blake Maple, Jason Maple, Afton Haas, Luke Walton, Darren Walton, Jr, Matthew Walton, and Mark Brown 1 Great Granddaughter: MaryJane (“M.J.”) Walton And many nieces and nephews And she was preceded in death by her parents: Cleo Wheeler and Loma Evans; two brothers: Gary Wheeler and Ken Wheeler and a sister-in-law: Patricia Wheeler

Laveda Mae Haas was born on Wednesday, September 29, 1943 in Broken Arrow, Oklahoma, one of six children to Cleo and Loma (Holt) Wheeler. Her family moved to Oregon when she was in Junior High School. She grew up close with her siblings. She... View Obituary & Service Information

The family of Laveda Haas created this Life Tributes page to make it easy to share your memories.

Send flowers to the Haas family.