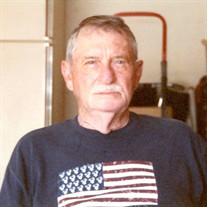 Larry McKinzie, Sr. was born on Wednesday, November 27, 1935 in Atwood, Oklahoma. He was the son of Virgil and Ollie (Hopkins) McKinzie. He passed from this life on Thursday, July 2, 2020 in Tulsa, OK at Clarehouse. He was 84 years old. Larry grew up helping his family on their soybean farm near Atwood, northeast of Ada. He attended Leader School in his primary years and was a 4-year letterman in both basketball and baseball in high school. He graduated from Atwood High School, the class of 1954. He met and married Betty Lou Patrick on May 28, 1954 in Allen, Oklahoma. After 17 months in the U.S. Army serving as a cook and playing on the Army baseball team he returned home and tried out for the New York Yankees. By this time, they had started raising their family and he never looked back. Always a tireless worker, he was a route salesman for several food service companies such as Rainbow Bread and Nabisco. In 1967, at the ripe age of 32, he bought a grocery store here in Broken Arrow. Within a few years, he owned another grocery store as well as a restaurant. He worked 18-20 hour days, so much so that they had to rent a small apartment behind the grocery store so he could get a few hours of sleep before beginning his next long day. And yet he always found time to coach all three of his boys’ little league baseball teams. When asked to describe their dad, phrases like strong work ethic, compassionate, loving, and a dog lover were among the first things mentioned. He was known to rescue more than one stray dog through the years. He and the boys attended the Basketball Tournament of Champions here in Tulsa every year. Larry was crazy about his ten grandkids and loved attending their sports events and other activities, even when that meant traveling to different states. Larry always made sure he purchased a hat from whichever team his grandkids played on. He was the best “PaPa” they could have ever imagined. Larry is survived by: Sons: Larry and Kim McKinzie of Broken Arrow Steve and Jeanne McKinzie of Broken Arrow Mark and Jennifer McKinzie of Broken Arrow Daughter: Teresa Morsey of Sapulpa Stepbrother: Denny Joe Miller Stepsister: Sherry Miller 10 Grandchildren: Carson and Amber McKinzie Ryan and Tasha McKinzie Justin and Hilary Morsey Chris and Oliva McKinzie Sarah and Kyle Siegal Emily McKinzie Tyler McKinzie Loren and Hank Latimer Amber and Justin DeLong Caitlin and Jeremy McNeice And 19 Great Grandchildren He was proceeded in death by his parents, his wife, Betty and one Stepbrother, Jerry Lynn Miller In lieu of flowers, please consider donating to Clarehouse, 7617 S. Mingo Tulsa, OK 74133

Larry McKinzie, Sr. was born on Wednesday, November 27, 1935 in Atwood, Oklahoma. He was the son of Virgil and Ollie (Hopkins) McKinzie. He passed from this life on Thursday, July 2, 2020 in Tulsa, OK at Clarehouse. He was 84 years old. Larry... View Obituary & Service Information

Send flowers to the McKinzie family.