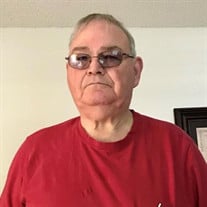 Larry Little was born in Forrest City, Arkansas on Thursday, June 12, 1947, the fifth of seven children to Roy and Ora Lee (Hill) Little. He passed from this life on Monday, August 17, 2020 at the age of 73. Larry grew up working alongside his brothers and sisters and parents on the family farm near Forrest City. He learned the value of hard work and a job well done. At the age of fifteen, he worked as an auto mechanic. On a trip to see some friends he met the love of his life, Mary, at a gas station while he was filling his car. It truly was “love at first sight”. They began dating that very night. He and Mary married on November 7, 1967 in Geneva, Illinois. He worked home construction for awhile in Illinois before they moved as a couple to Arkansas for a short time and then landed in Tulsa in 1980. Larry opened a diesel repair shop that he ran for 20 years. They gave birth to one daughter, Alisa, whom he was immensely proud of. After running the diesel repair shop, he began to drive a truck, first on hot shots and then later over the road. He had a passion for old cars and even built a monster truck in 1982 that he recently saw on the internet. He enjoyed traveling with a few friends mining in Colorado and fished for a few years. He enjoyed watching The Weather Channel and Pickers on TV. He was a big man with a tender heart and was never embarrassed about showing his emotions. Larry was tough on guys that his daughter, Alisa, brought home so he was the one who brought home her eventual husband, Doug, to meet his only daughter. He was an animal lover, but they paled in comparison to the way he loved his granddaughter, Piper. Larry is survived by: Wife, Mary of the home in Broken Arrow Daughter, Alisa Longnecker and her husband, Doug of Broken Arrow Granddaughters, Piper Longnecker and Tiffany Kimbrough And numerous nieces and nephews He was preceded in death by his parents: Roy and Ora Lee Little; two brothers, Frank Little and Charles Little; three sisters, Ilene Willis, Irene Holt, Bonnie Spear and a grandson, Jackson Longnecker

Larry Little was born in Forrest City, Arkansas on Thursday, June 12, 1947, the fifth of seven children to Roy and Ora Lee (Hill) Little. He passed from this life on Monday, August 17, 2020 at the age of 73. Larry grew up working alongside his... View Obituary & Service Information

The family of Larry Little created this Life Tributes page to make it easy to share your memories.

Larry Little was born in Forrest City, Arkansas on Thursday,...

Send flowers to the Little family.