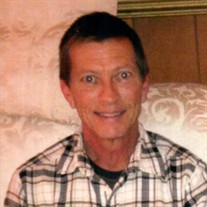 Larry Keith Hensley of Owasso, passed away peacefully Friday, October 15, 2021 at the age of 63. He was surrounded by many loving family members and friends. A funeral service honoring his life will be held at 11 am, Friday, October 22 at Hayhurst Funeral Home in Broken Arrow, OK. He will be laid to rest at Vernon Cemetery in Coweta, OK. Friends may visit Larry at the funeral home Thursday, October 21 from 12-8pm. The family will be receiving friends from 5-7pm. Larry was born Monday, March 17, 1958 in Hawthorne, California to Doyle and Marthel (Lawson) Hensley. He was a 1976 graduate of Broken Arrow High School where he played percussion in the Pride of Broken Arrow. On February 23, 1985, Larry married the love of his life, Tina Bridwell. He brought to this union 2 young children, Cameron and Miranda. In 1987 their son Kenny was born completing their family. Larry retired from UPS where he was a driver for many years. One of his passions was target shooting. This summer he became the first ever Sharp Shooter Champion of our Patton family reunion. He loved sharing the gospel of Jesus Christ, doing outreach with his church, bird hunting, fishing, golf, and watching NASCAR; especially in the days of Dale Jarrett. His greatest joy in life came from spending time with his family. Those who will miss him include: Wife, Tina Hensley of the home; Children Cameron Hensley and Lindsay of Orlando, Miranda Shah and Aamer of Peshawar, Kenny Hensley and Erica of Skiatook; Grandchildren Omair Shah, Olivia Hensley, Sofia Shah, Kenson Hensley, Inara Shah, Asher Shah; Brother Mike Hensley of Edmond; Sister Judy Highfill and Steve of Coweta. Also missing him is a host of nieces, nephews, extended family and many close friends. Larry is now in his Heavenly home alongside his parents, Doyle and Marthel Hensley. Memorials may be made in lieu of flowers, His Littlest Blessings Children’s Clothing Ministry, 109 N 11th St, Broken Arrow, OK

Larry Keith Hensley of Owasso, passed away peacefully Friday, October 15, 2021 at the age of 63. He was surrounded by many loving family members and friends. A funeral service honoring his life will be held at 11 am, Friday, October 22... View Obituary & Service Information

Send flowers to the Hensley family.