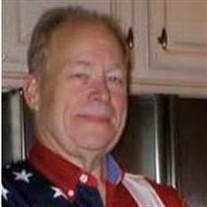 Larry Duane Frederick was born in Hominy, Oklahoma on Sunday, March 9, 1947, to Ralph Elmer and Vernis Maxine (Dobbins) Frederick. He passed from this life on Friday, August 27, 2021, in Tulsa, Oklahoma at the age of 74. He was an older brother to his sister making up the Frederick’s family of four. Their father worked for the Tulsa Board of Education in the Maintenance Department as a painter. Their mother was a full-time homemaker. The family moved to Pawhuska where Larry attended grade school and then Tulsa where he graduated from Central High School in 1965. He met Pamela “Pam” Harris when she was 15 at the stock car races in Tulsa. They dated for a while, then broke up while he joined the U.S. Navy. After returning from his service with the Navy the two got back together and married on June 8, 1973, in Tulsa, Oklahoma. They eventually became the parents of one son and three daughters. Larry worked as a heavy equipment diesel mechanic for Arrow Trucking in Tulsa for over 15 years. His hobbies included motorcycles, rebuilding hot rod cars, hunting, and fishing. Words his family used to describe Larry are selfless, godly, a hard worker, persistent, easy to talk to, a kind and gentle soul, and a mentor. He loved his God, his country, and his family. Known as “Papa” to his grandchildren, he will be missed by all who knew and loved him. In lieu of flowers the family requests donations in Larry’s name to EOD Warrior Foundation at: www.eodwarriorfoundation.org Left to cherish his memory are wife, Pam, of the home in Broken Arrow Son David Frederick (Justine) of Rio Rancho, New Mexico Daughter Kari Koppenhaver (Keith) of Broken Arrow Daughter Mary Beth Teufel (Phillip) of Broken Arrow Sister Carole Stewart of Broken Arrow Grandchildren Kayleigh, Emily, Adam, and Kaden Greatgrandchildren Noa, Graham, and “Baby Y” And numerous nieces, nephews, and cousins He was preceded in death by his parents, daughter Kimberlie Ansell, and grandson James Aaron Duane

Larry Duane Frederick was born in Hominy, Oklahoma on Sunday, March 9, 1947, to Ralph Elmer and Vernis Maxine (Dobbins) Frederick. He passed from this life on Friday, August 27, 2021, in Tulsa, Oklahoma at the age of 74. He was an older brother... View Obituary & Service Information

The family of Larry Frederick created this Life Tributes page to make it easy to share your memories.

Larry Duane Frederick was born in Hominy, Oklahoma on Sunday,...

Send flowers to the Frederick family.