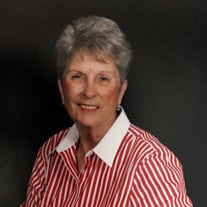 Frances “LaJean” Roper LaJean was born on Sunday, November 20, 1938 in Levelland, Texas, the daughter of Herman Timmons and Emma (King) Timmons. She passed from this life on Monday, May 11, 2020. She was 81 years of age. LaJean was the ace daughter of the family, looking after two younger brothers growing up together on a west Texas farm. The family was very poor, but the children were unaware based on the home and life that was created by their parents. She loved to hear her mother sing and would spend time with her father any chance she could get. The family farmed cotton, maize, and sorghum which resulted in LaJean learning to drive a tractor at a young age. She was overjoyed when her father had enough confidence in her to operate the tractor on her own. When she wasn’t busy helping with the farm, she would walk in the field, play basketball and baseball, ride her horse “Nell”, and play games when it was too cold to be outside. In high school she competed fiercely, splitting her time between barrel racing and taking her basketball team to the state championships. She was always a sweetheart, but never lost her competitiveness. Her grandkids will tell you that she would never let them win at any card games or dominoes. She played to win and expected everyone else to do the same. Doug and LaJean met during high school in Tulia, Texas where they dated for 3 years (or as Doug describes it, “I chased her for 3 years”) until she finally agreed to marry him in 1958. On the day they got married Doug told LaJean that he’d finally caught her. Soon afterward she became the mother of two children, Rodney and Cari. Then, in 1971, the family left Texas and moved to Oklahoma City for three years and then to Broken Arrow in 1974 where they have been ever since. LaJean was dedicated to Doug and their marriage, and she loved her family dearly. She wanted her children, grandchildren, nieces and nephews, and all her greats to know that she loved and respected them. She was so proud of her family. LaJean was not shy with her love and made others feel like they were her own. Regardless of family ties, she acted as a sister, mother, and grandmother to many. LaJean was a go-getter. She described herself as “hyper” as a child and that energy seemed to stay with her throughout her life. She was confident and independent. After she worked as a tax preparer for Fred Sanders, she began her career in real estate with Jim Kelley for a few years before branching on her own and later became an independent broker. At one point, LaJean and her daughter Cari joined forces to create Oklahoma’s greatest real estate duo. They were unstoppable. LaJean also managed several rental properties where one renter described her as the best landlord they’d ever had. She was smart, bold, and caring which brought her much success over her lifetime. Doug and LaJean were a team. In every aspect of their lives, they worked together and deeply respected each other. After 62 years of marriage, their biggest argument was over the placement of a towel rack in their bathroom. Doug and LaJean enjoyed dominoes, traveling, and playing golf with several other couples from Arrow Heights Baptist Church, where they have been faithful members for over 40 years. God was the core of LaJean’s life and through him she gained complete happiness. She wanted to be just like her grandmother who exemplified the characteristics of a Christian by being patient, kind, and gentle. LaJean lived to serve others. She was the church pianist for two different churches for more than 20 years and sang in the Arrow Heights Church Choir. She served as the Senior Adult Sunday School Department Director where she was loved dearly. Doug says her life motto could be summed up as “it’s not about me, it’s about others.” LaJean had advice for just about everything. For marriage, her advice was that sometimes you have to be more committed to the marriage than the person. For personal growth, she would say that a person’s personality gets stronger with age, so it was important to address personal development issues early on. For financial success, she believed that people should live below their means, find contentment, not worship material things and to take time off to rest and spend time with family. These lessons, along with her commitment and love for others have defined what it means to be a member of her family, and her memory will live on for eternity. LaJean is survived by, Husband, Doug, of Broken Arrow Son, Rodney, of Broken Arrow Grandchildren, Hunter Roper and Lauren of Oklahoma City Hayley Brooks and Jeffrey of Denver, Colorado Great-Grandchildren, Emma “Reese” Roper and Wylie Roper of Oklahoma City Brother, Howard Timmons of Brownfield, Texas Michael Timmons of Brownfield, Texas Son-in-Law, Steve McLarty of Broken Arrow LaJean was preceded in death by: Her parents, Herman and Emma (King) Timmons and one daughter, Cari McLarty Memorial services will be streamed live 10 am, May 15, 2020 at https://vimeo.com/418047555

Send flowers to the Roper family.