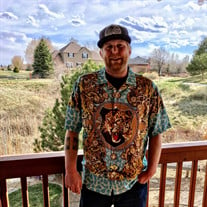 Funeral services for Kyle Thomas Underwood are scheduled for 11:00 AM (CDT) - 10:00 AM (MDT), Tuesday, July 7, 2020 at the Hayhurst Funeral Home Chapel in Broken Arrow, Oklahoma. Kyle Thomas Underwood was born on Thursday, April 5, 1990 in Maplewood, Minnesota the son of Brian and Ronda Underwood. Kyle passed this life on Monday, June 29, 2020 in Savannah, GA. While growing up in Shoreview and Moorhead, MN, Kyle was known as one who loved to socialize with family and friends while spending time outdoors. He enjoyed family camping, fishing, hiking and playing soccer. After moving to Greeley, Colorado in 1998, Kyle began playing in local junior tennis programs and later for Greeley West High School; competing in the State Tournament all four years. During his senior year he was given an “Artist to Watch” award for his ceramic work. After graduating in 2008, Kyle moved to Breckenridge, CO. During his 12 years there, he worked as a “lifty” for Vail Ski Resort, a tour guide for The Country Boy Mine, and as a chef for several Breckenridge restaurants. During the past few years he worked for an electrical contractor doing home remodeling projects. Kyle was one who never met a stranger. When he was old enough to talk, he would chat with anyone, no matter how young or old; this continued into adulthood. He will forever be known for his kind heart, jovial laugh, adventurous spirit, beautiful blonde hair, and blue eyes. He is survived by, Parents, Brian and Ronda Underwood, Greeley, CO Brother, Eric and wife Taylor Underwood, Broken Arrow, OK Nephews, Mason and Colton Underwood, Broken Arrow, OK Grandparents, Mel and Sandy Larson, Shoreview, MN Dennis and Betty Underwood, Overland Park, KS He was preceded in death by, Grandmothers, Peg and Donna; Aunt, Jeanne. Kyle’s ashes will be scattered at a later date in his beloved Rocky Mountains.

Funeral services for Kyle Thomas Underwood are scheduled for...

Send flowers to the Underwood family.