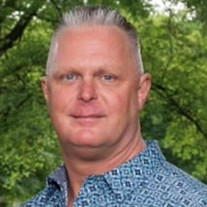 Kyle Dwayne Rhodes was born in Tyler, Texas on Monday, September 18, 1967, to Harold Martin Rhodes, Jr., and Carol June King Rhodes. He received his eternal reward when he passed from this life to his eternal home in heaven on Friday, January 28, 2022, in Tulsa, Oklahoma at the age of 54. He was one of three children born to the Rhodes family. Their father had a sales career, so the family moved around when Kyle was younger, but they settled in Tulsa, Oklahoma by the time he was in junior high school. He graduated from Union High School in Tulsa in 1986. During those high school years Kyle was in a typing class and a certain young lady caught his eye. He and Angela Davis dated for four years and then married on January 30, 1988, in Tulsa, Oklahoma. Kyle was always active in sports growing up – he participated in basketball, swimming and ran track. In high school he played football. It was during those years that he got involved in competitive body building. Kyle was the ultimate family man. He loved his family fiercely. That love went beyond Angela and his two children to several pets through the years. He was especially fond of a dog named Champ. Their current canine children include Bilbo and Sassy. He remained close with his parents and siblings through his entire life. He earned a reputation as the BBQ Master of the family. Kyle loved to cook for them and often shared recipes and talked cooking with his mom. He was a supportive father, coaching his kids’ sports teams and continued working out and focusing on health and fitness for both himself and others. He was a 2nd Degree Black Belt in Taekwondo and participated on teams that showcased their abilities using that platform to preach the gospel to those in attendance. He loved his sports teams: Dallas Cowboys, Texas Longhorns, and the Los Angeles Lakers. But most of all, Kyle was a man after God’s own heart. He loved people, shared Christ with them passionately and prayed for friends as well as strangers he met along the way. He will be missed by all who knew and loved him. Left to cherish his memory are his wife, Angela, of their home in Broken Arrow Son, Dustin Rhodes and his significant other, Kelsey of Broken Arrow Daughter, Chelsea Mahan and her husband, Austin of San Antonio, Texas 3 Precious Grandsons, Donny, Henry, and Theodore Parents, Harold “Marty” and Carol Rhodes of Broken Arrow Brother, Alan Rhodes and his wife, Cindy, of Broken Arrow Sister, Rhonda Raines, of Tulsa And numerous aunts, uncles, cousins, nieces and nephews

Kyle Dwayne Rhodes was born in Tyler, Texas on Monday, September 18, 1967, to Harold Martin Rhodes, Jr., and Carol June King Rhodes. He received his eternal reward when he passed from this life to his eternal home in heaven on Friday, January... View Obituary & Service Information

Send flowers to the Rhodes family.