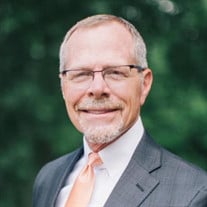 Kurt Louis Ochsner was born in Springfield, Missouri on Friday, August 4, 1961, to Winston Arthur and Peggy Jean (Fleisch) Ochsner. He passed from this life to his eternal home in heaven on Wednesday, September 22, 2021, at the age of 60. Kurt was the youngest of three children born to Win and Peggy and had two older sisters whom he loved to tease. The family moved to Tulsa, Oklahoma when Kurt was a senior in high school. He was an active youngster who had a drive to accomplish big things with his life. He played the trumpet in the Renegade Regiment Marching Band at Union High School in Tulsa, earned his Eagle Scout Award, and played on Union’s baseball team which won the Oklahoma High School Baseball Championship his senior year in 1979. He graduated from Union High School in 1979. Following high school, Kurt attended Oklahoma State University and transferred to Logan School of Chiropractic Medicine in Chesterfield, Missouri where he earned his bachelor’s degree in human biology in 1983 followed by his Doctor of Chiropractic Medicine in 1985. He opened his practice, Ochsner Chiropractic Centre, on March 3, 1986 in Tulsa, Oklahoma. Kurt’s practice thrived through his hard work, dedication, and commitment to making his patient’s lives better and more pain free. Kurt met Jaxie Laniece Abernathy and fell in love. They married in Oklahoma City, Oklahoma on June 7, 1986. Kurt and Jaxie have three children. He loved being a dad and led his family to love and serve the Lord Jesus Christ. The Ochsner family was actively involved at Gracemont Baptist Church, First Baptist Church of Broken Arrow, Riverview Baptist Church, and in recent years, Battle Creek Church in Broken Arrow, where Kurt taught in both youth and college Sunday School. Kurt enjoyed choral music and was an active member of the church choir. He remained physically active and played church league softball and golf whenever and wherever possible. He loved cutting up with his playing partners and picking on them - all in good fun. Kurt loved the outdoors and was an avid hunter who raised champion English Setters and Pointers, running them in field trials across the country. Kurt’s family describes him as hard working, energetic, faithful, and fun loving. He was a man with a big heart who was benevolent and generous. Both his friends and patients know that he loved to joke around at home, in the office, and anywhere else you found him. He will truly be missed by all who knew and loved him. Left to cherish his memory are his wife Jaxie of Bixby Daughter Hunter Nicole Beless and husband Brooks of Cave Springs, Arkansas Daughter Alexandra Jordan Ochsner of Bixby Son Drake Winston Ochsner and his wife Chelsea of Tulsa Grandchildren Hadley Grace Beless, Davy Kathryn Beless, Bo Elliot Beless, and Dietrich Winston Ochsner Mother Peggy Jean Ochsner of Tulsa Sister Kristy Lee Farmer Workman and her husband Bradley of Edmond He also leaves behind a host of nieces, nephews, cousins, and friends - too many to even try and count. He was preceded in death by his father Winston Ochsner and sister Kay Higgs. In lieu of flowers, Kurt’s family is requesting donations in his name to tC Egypt which is a Christian Organization that exists to serve the Christian population in Egypt and the Middle East. They operate with the understanding that this Christian population, the largest in the Middle East, is the door to reaching the rest of the Middle East with the Gospel. tC Egypt is a community that believes in the healing power of Jesus, provides a shame-free space of healing, prayer, and discipleship nurtured by the young people of Egypt; a community of people who feel they have no place in the established church tradition, those who post-Revolution feel they have been relegated to the sidelines, and are looking for a place to make sense of their pain and find freedom in Christ. tC Egypt believes that Christians in Egypt are uniquely positioned to create a lasting impact in the region and it is our goal to support and equip them in this endeavor. Because of this, the Coptic Christians are indeed a sleeping giant in the Middle East; if their hearts would be awakened to the truth of scripture then the power of the Gospel will sweep through Egypt and into the Middle East. To give: https://battlecreekchurch.com/give/ •select Broken Arrow Campus and then in the drop down click on Missions/Care

Kurt Louis Ochsner was born in Springfield, Missouri on Friday, August 4, 1961, to Winston Arthur and Peggy Jean (Fleisch) Ochsner. He passed from this life to his eternal home in heaven on Wednesday, September 22, 2021, at the age of 60. Kurt... View Obituary & Service Information

Kurt's service will be streamed live at https://battlecreek.online.church/

Kurt Louis Ochsner was born in Springfield, Missouri on Friday,...

Send flowers to the Ochsner family.