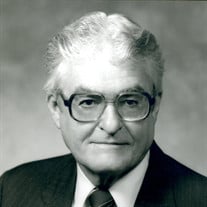 Services honoring the life of Kenneth Jasper Forrester will be 11:00 a.m., Monday, March 9, 2020, at Fort Gibson National Cemetery. Viewing will be at the funeral home on Sunday from 12:00 p.m. to 8:00 p.m. with family there to receive visitors from 2:00 p.m. to 4:00 p.m. Ken was born in Rupert, Arkansas on March 29, 1923, to Fred Bolden and Bertha (O’Neal) Forrester. Ken passed away in Tulsa, Oklahoma on Tuesday, March 3, 2020 at the age of 96. Ken graduated from North Little Rock High School in 1941, then joined the military in 1943 and served with the Army Air Corps in the Pacific Theater of World War II. He was especially proud of flying with the WASPs and was grateful to the military for providing the means to achieve his law degree. He worked for the Social Security Administration and ultimately became an Administrative Law Judge, retiring in 1984 after fifteen years in that position. Ken married Deloris Steiger in Vermillion, South Dakota, on July 22, 1957. They were blessed with two sons. Ken was a wonderful husband, father and grandfather. He adored his family and loved spending time with them. He had a great, dry sense of humor. Ken was a very caring and empathic person and was always willing to help others. Ken and Dee loved rodeos and traveled to see them as often as they could. He was a loving father who encouraged his children to grow into their own lives, continually providing exposure to different things such as martial arts, Boy Scouts, music, shooting, and everything else that interested them, but never dictating a particular path for them. In contrast to his own upbringing, he ensured that his children were blanketed by an unquestioned sense of love and security. Their self-confidence was among his greatest gifts to them. Ken was primarily a caregiver; he was the guardian of his father, he built a house for his parents with his own hands, he supported his wife and sons financially and through the cares of daily living, encouraging each to develop their individual strengths in any way they could. As with his sons, he spent time with his grand- and great-grand children, loving and encouraging them in all their endeavors. When his mother, Bertha, went into a nursing home, he became an advocate for nursing home residents. He never stopped noticing where things could be made better – sometimes to the distress of the people he was trying to help. In particular, whenever he went into a restaurant, he would tell the owner or manager how to improve their business… Ken’s passion was writing. He wrote about his many different interests, including travel, rodeos, nursing home advocacy and bubble gum (his first published story). He authored a book about wine appreciation and wrote a column about wine for the Arkansas Gazette for five years. He also authored monographs for attorneys about Social Security and a book on dealing with nursing homes. Ken bottled his own sherry, “Ken Forrester’s Golden Oak – Private bottling Heavy Cream Sherry”. He loved spending time with his two sons, spending many hours working on small engines – teaching them how to tear them apart and put them back together – better. They started with lawn mowers and worked up through motorcycles, buying junked ones and rehabilitating them. He was always patient, letting his sons make their own mistakes and learn from them. Ken’s life was characterized by honesty, integrity and empathy. He didn’t suffer fools at all, but was always sympathetic to those less fortunate. Ken is survived by: Wife, Deloris Forrester, Broken Arrow, OK Children, Steven Forrester and Jennifer, Aurora, CO David Forrester and Nicole, Broken Arrow, OK Grandchildren, Cynthia, Kyle, Chloe, Ashley, and Jacob Great Grandchild, Ayden Ken was preceded in death by his parents, his brother JC Forrester, and sisters Ilene Bailey and Nova Forrester. In lieu of flowers, please make donations in the name of Kenneth J. Forrester to Clarehouse, 7617 S Mingo Rd., Tulsa, Oklahoma 74133, Phone: 918.893.6150, email: [email protected]

Services honoring the life of Kenneth Jasper Forrester will be 11:00 a.m., Monday, March 9, 2020, at Fort Gibson National Cemetery. Viewing will be at the funeral home on Sunday from 12:00 p.m. to 8:00 p.m. with family there to... View Obituary & Service Information

The family of Kenneth Forrester created this Life Tributes page to make it easy to share your memories.

Services honoring the life of Kenneth Jasper Forrester will be...

Send flowers to the Forrester family.